This July 31st celebrates the birthday of the Boy Who Lived, Harry Potter. Sharing a birthday with author J. K. Rowling, Harry will be celebrating his 39th birthday. Many happy returns! 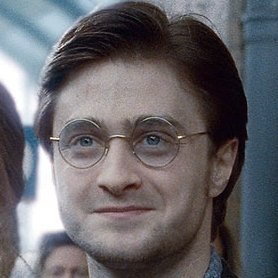 That's right, The Boy Who Lived was canonically born July 31, 1980. Rather than being a relatively young adult, Harry's well into his adult life and has multiple kids!

The very end of Harry Potter and the Deathly Hallows includes an epilogue showing the main characters grown up with kids of their own and also a date: September 1, 2017. This date occurs nearly a decade in the future from when Deathly Hallows was published back in July 2007, but clever readers could already tell then that some of the dates did not add up. Rowling later released the official date of Harry Potter's birthday, as well as the years when his books take place. Harry Potter and the Goblet of Fire takes place during the 1994/95 school year.

Harry Potter and the Cursed Child picks up where the Deathly Hallows epilogue leaves off, replaying that final scene. The play and the script based on it follow Harry's son Albus as he grows up and goes through his own adventure. The bulk of the book is set during Albus's fifth year of school which takes place in the far-flung future of 2022.

Harry Potter and the Cursed Child 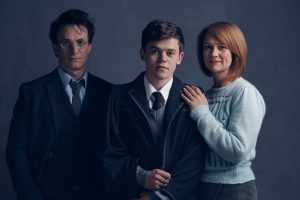 There are a lot of cool references in the Harry Potter universe beyond the dates they took place. For instance, in Harry Potter and the Goblet of Fire, Harry mentions playing with his cousin's new PlayStation. Living with muggles (non-magical folks), Harry Potter had ready access to a lot of the same things we did, like television and video games, however the Sony PlayStation had yet to be released! Since Harry probably did not magically gift his cousin with the video game, there are crazy theories about how Uncle Vernon got a hold of an early version of the popular system.

There are also references to other historic events and people. For instance, the war between Dumbledore and Gellert Grindelwald takes place at the same time as the Second World War. There are numerous allusions to the Second World War going on at the time and both wars ended in 1945. In the movie Fantastic Beasts: The Crimes of Grindelwald, Newt Scamander's brother Theseus is noted to have participated in the First World War and is praised for his valor. 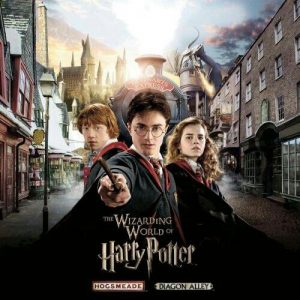 The Wizarding World is a theme park hosted at Universal Studios, divided into two segments. Guests can explore a recreation of Hogwarts Castle and the nearby village of Hogsmeade and then take the Hogwarts Express over to Diagon Alley. Though scaled down to fit inside Universal Studios, the Wizarding World is a fantastic experience where you can immerse yourself in Harry Potter's world and learn more about our favorite witches and wizards.

Pottermore is an interactive website run by J.K. Rowling and her Pottermore holding company. The website allows visitors to be sorted into the Hogwarts houses, attend "classes", discover their patronus and generally learn more about the wizarding world. Fans also have access to dedicated forums to discuss the works with other fans and get access to supplementary writing and new releases from Miss Rowling.

And as if that were not enough, there is now a new augmented reality game, Harry Potter: Wizards Unite fans can now play on their phones. It uses mechanics similar to the popular Pokemon Go, so fans may want to download and visit their local library to see what adventures they come across!

Happy reading everyone! Stay tuned for more fun blogs and events in the near future.