Born Jean Rabin, the famed naturalist was born in Les Cayes, Saint-Dominique in the Caribbean Sea. The son of a French naval officer and privateer, young Jean grew up with several siblings and parents, before moving to Couëron in France. From a young age, Audubon showed interest in nature, particularly birds, and would often collect their eggs and nests for study and drawing.

In 1803, Jean obtained from his father a forged passport, allowing him to emigrate. In America, Jean anglicised his name to John James Audubon; he also caught yellow fever. After spending weeks recovering in Philadelphia, he moved to the family estate at Mill Grove, where he shortly after met and fell in love with his future wife, Lucy Bakewell. They had four children: two daughters who died in infancy and two sons who grew to manhood, Victor Gifford and John Woodhouse Audubon.

Once he recovered, married, and settled down, Audubon began on what would become the great work of his life: The Birds of America.

Starting in 1820, Audubon began his quest to catalog and draw the various avians in the Western Hemisphere. Audubon and his assistant Joseph Mason spent several years travelling throughout the nascent country, including a lengthy stay in Louisiana. The Audubon Nature Institute and Zoo is located on the grounds of the estate Audubon lived in while in New Orleans in 1821. Previously, Audubon and his assistant spent the summer of that year in West Feliciana Parish, living at Oakley Plantation where he taught Eliza Pirrie painting and languages in between forays into the woods. Audubon painted or began painting over 30 of the birds while at Oakely Plantation, and the plantation today is listed as the Audubon State Historic Site, opens a new window. 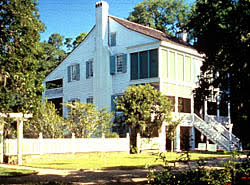 Audubon spent much of the early 1820s struggling to make ends meet. In his quest to catalog the birds, Audubon took numerous jobs, drawing death portraits for the newly deceased, charcoal portraits for those looking for one, and even oil portraits for wealthy patrons he visited while heading south along the Mississippi River. In 1823, he even instructed at Jefferson College in Mississippi. Lucy Audubon meanwhile supported herself and their children by working as a teacher.

After finishing his journey, Audubon had accumulated over 300 drawings of various birds. Publishing his work proved difficult however, as Audubon faced resistance from the Academy of Natural Sciences in Philadelphia, despite support from fellow naturalist and ornithologist Charles Bonaparte, nephew of the late Emperor Napoleon Bonaparte. Instead, at Charles' suggestion, Audubon traveled to Europe. After months spent advertising his art across the continent, including befriending much of the nobility and royalty, Audubon began to publish his work. Perhaps his biggest supporter, King George IV of England loved Audubon's work so much that London's Royal Society elected him as the second American ever, after Benjamin Franklin, to be inducted. 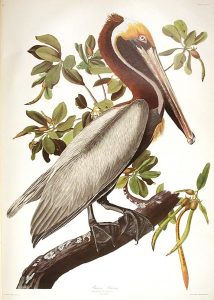 Audubon's style largely involved portraying the various birds in their natural habitat, in as natural a pose as possible, and virtually all drawn life-size. Investors, usually referred to as subscribers because of how they subscribed to routine releases of his work, received several copies per month, usually a large bird, a medium one, and two or three small birds. Audubon created these copies using copper plates, the typical method of reproduction at the time, as well as engraving and aquatint. The original edition measured in at nearly 40 by 30 inches and required the additional efforts of 50 coloring artists, hired and set down in assembly line fashion. Several of the original prints and releases did not feature any notes, as including them would have required Audubon to donate copies to the British public libraries, an extraordinary expense for a cash-strapped artist. Later editions and official prints do of course come with text, largely provided by Audubon and William MacGillivray.

The Birds of America remains Audubon's most well known work. It fundamentally changed the naturalist profession, imparting new methods of taxidermy and set-dressing, as well as heightening the expected quality of art. Charles Darwin, famed for his On the Origin of the Species, attended a lecture held by Audubon while the latter visited Scotland, and quoted Audubon three times in his work. Audubon is also credited for discovering and cataloging 25 new species of birds and 12 sub-species. Audubon later published two other works, Ornithological Biographies and The Viviparous Quadrupeds of North America.

Audubon's health began to fail in 1848 when he began developing the symptoms of Alzheimer's disease. Suffering from dementia and other issues, Audubon deteriorated and eventually passed in 1851, survived by his wife and sons.

Want to learn more about John James Audubon and the native birds of North America? Feel free to check out some of the items below:

Audubon Birds : 252 Prints From the Birds of America

Looking for something else? As always, the St. Tammany Parish Library is happy to offer free access to our online catalog, opens a new window for more information on this and other searches you may be interested in.