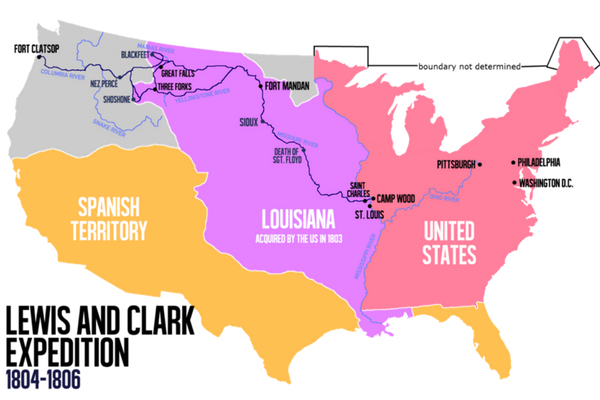 The United States is full of breathtaking landscapes and incredible tales. Few are as well-known or incredible as the adventure of Meriwether Lewis and William Clark, which forms the basis of this work by Stephen E. Ambrose.

As we celebrate three hundred years since the founding of New Orleans, natives might be interested to learn that it was for New Orleans that the Louisiana Purchase was made making the Lewis and Clark Expedition a necessity. Ambrose goes into great detail relating the motives of President Thomas Jefferson and his deal with Napoleon Bonaparte to acquire New Orleans and, to Jefferson's pleasant surprise, the right to the entire Mississippi River Basin. In 1803, most maps were incomplete or inaccurate so no one knew what the purchased entailed. Consequently, Jefferson arranged an expedition into this new frontier to explore and map it out.

The book is, in many ways, a biography of three people. In addition to discussing the presidency of Jefferson and his hopes and dreams for this grand new expedition, there is also a great deal of information on both Meriwether Lewis and William Clark. Of the two, Ambrose gives far more attention to Lewis, simply because there is more known about him. Lewis was a child during the Revolution, and like Mr. Jefferson, a bit of bibliophile, with a love of nature and exploring. Clark was a career military officer, and though the two did briefly serve in the military together prior to their adventure, Clark was chosen to fulfill the military role in their partnership. Several pages are spent showing Jefferson's thoughts and concerns about the expedition as it took place.

One of the things many histories gloss over, especially for young readers and popular histories, is that this really was an expedition: Lewis and Clark left the United States with several men in tow, many of whom were experienced woodsmen and hunters accustomed to long travel and repairing their own equipment. Roughly halfway through the adventure, Lewis and Clark recruited the young Sacagawea to serve as their guide and interpreter. There were numerous other changes to their group between their arrival at the Pacific Coast and their return journey.

Lewis and Clark eventually returned and were celebrated as heroes for their "undaunted courage" in the face of overwhelming odds and extreme danger. Undaunted Courage is compelling because it conveys not just the extraordinary achievement undertaken by these people, but also the extreme danger they encountered and their unorthodox resourcefulness. It includes:

Readers will enjoy the incredible adventure in this highly recommended book. The author, Stephen E. Ambrose, was a celebrated historian in the late twentieth century who studied at University of New Orleans and Louisiana State University. He was a biographer for Presidents Eisenhower and Nixon as well as the founder of the National World War II Museum, originally known as the National D-Day Museum. Undaunted Courage was originally published in 1996.

Undaunted Courage is also available in audiobook format and on Hoopla .