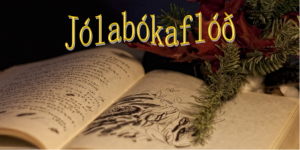 Iceland has a charming literary Christmas tradition called Jólabókaflóð (pronounced yo-luh-BOK-uh-flot; the o's have the long Ō sound), which in English literally means "Yule Book Flood." This exciting season begins each year in mid-November, when the Icelandic book industry distributes their catalog, the Bókatíðindi (literally "book news"). A free copy of this catalog is sent to every home in Iceland and is also available online, opens a new window. The fun begins when the Bókatíðindi becomes available and the Icelanders get the opportunity to look through it to decide which books they will give to friends and family for Christmas.

Want to learn more? Here are some websites to visit to read more about Icelanders' love of reading and writing:

The Icelanders and their Big Love of Books by Alda Sigmundsdóttir | GuideToIceland.is, opens a new window

Iceland: Where One in 10 People Will Publish a Book | BBC.com, opens a new window

In appreciation of Iceland's Christmastime tradition of giving books, as well as the year-round Icelandic tradition of writing books, check out one of these books written by an Icelander.

"An octogenarian living out her final days in a garage with a laptop and a hand grenade reflects on her life as the daughter of a prominent political family in idyllic western Iceland."

"Icelandic handyman Jonas has decided to commit suicide . . . he travels to Hotel Silence . . . to hang himself. His skimpy luggage . . . draws the suspicion of . . . May and Fifi, who run the hotel, and the two other guests . . . Jonas almost passively starts minor repairs on the hotel and wanders the city with blank nonchalance . . . Jonas's stoic implacability endears him to May . . . Soon, other city residents are calling on him for repairs, and Jonas's suicidal intentions lift, even if he retains the same cool disconnection."

"THE PAST In wartime Reykjavik, a young woman is found strangled in 'the shadow district', a rough and dangerous area of the city. An Icelandic detective and a member of the American military police are on the trail of a brutal killer. THE PRESENT A 90-year-old man is discovered dead on his bed, smothered with his own pillow. Konrad, a former detective now bored with retirement, finds newspaper cuttings reporting the WWII shadow district murder . . . It's a crime that Konrad remembers, having grown up in the same neighborhood. A MISSING LINK Why, after all this time, would an old crime resurface? Did the police arrest the wrong man? Will Konrad's link to the past help him solve the case and finally lay the ghosts of WWII Reykjavik to rest?"

"Siglufjörður: an idyllically quiet fishing village in Northern Iceland, where no one locks their doors--accessible only via a small mountain tunnel. Ari Thór Arason: a rookie policeman on his first posting, far from his girlfriend in Reykjavik--with a past that he's unable to leave behind. When a young woman is found lying half-naked in the snow, bleeding and unconscious, and a highly esteemed, elderly writer falls to his death in the local theater, Ari is dragged straight into the heart of a community where he can trust no one, and secrets and lies are a way of life. Past plays tag with the present and the claustrophobic tension mounts, while Ari is thrust ever deeper into his own darkness--blinded by snow, and with a killer on the loose."

"Aldis hates her job working in a juvenile detention center in rural Iceland. The boys are difficult, the owners are unpleasant, and there are mysterious noises at night. And then two of the boys go astray. Decades later, single father Odinn is looking into alleged abuse at the center. The more he finds out, though, the more it seems the odd events of the 1970s are linked to the accident that killed his ex-wife. Was her death something more sinister?"

"When the gutted body of a businessman is discovered in the Icelandic embassy in Berlin, Iceland's best detectives are sent to Germany to investigate the crime. The stab wounds and the murder weapon -- an elegant hunting knife -- suggest a ritualistic killing. But the only suspects present in the sleek modern office building are some of the island nation's cultural elite, including Jón the Sun Poet and ceramics artist Lúdvík Bjarnason. The victim is someone few would miss, and investigators Birkir and Gunnar, joined by forensics expert Anna Thórdardóttir, wager they have an open-and-shut case on their hands. What they find is anything but: the crime reeks of premeditation and vengeance, and leads the team into a sordid underworld of international child abuse, arson, and retribution."

"Set against the stark backdrop of the Icelandic winter, an elusive, enigmatic fox leads a hunter on a transformative quest. At the edge of the hunter's territory, a naturalist struggles to build a life for his charge, a young woman with Down syndrome whom he had rescued from a shipwreck years before. By the end of Sjón's slender, spellbinding fable of a novel, none of their lives will be the same."

"After soldiers of an absurd and mysterious war decimate a rural 'temporary home for children,' and subsequently each other, the sole survivors - Billie, a feverishly imaginative 11-year-old girl, and Rafael, a defected and disturbed soldier - try to build a bucolic life."

"Snorri Sturluson feared that the traditional techniques of Norse poetics, the pagan kennings, and allusions to mythology would be forgotten with the introduction of new verse forms from Europe. This book was designed as a handbook for poets to compose in the style of the skalds of the Viking age."