Spring has sprung and summer is here! Midsummer marks the halfway point of the growing season and the start of astronomical summer. Midsummer falls on the Summer Solstice, approximately June 21 or 22 depending on the year. Astronomical summer is based on the Earth's axial tilt and elliptical orbit.

Midsummer is a widely celebrated holiday in most ancient cultures. It marks the height of the growing season, when the Earth is at its greenest and most abundant. Many cultures around the world host festivities in celebration of this happy time, and during Midsummer it is common to observe fertility rites and other fun activities that encourage interaction between people of both genders. Historically, Midsummer was also a very common occasion to host weddings and other happy events. Maypole dances (above) and bonfires (below) are also common.

Over time, certain aspects of the holiday have changed. In an effort to move away from what was then considered a 'pagan' holiday, the Catholic Church chose to recognize the holiday as an observation in celebration of one of its members. Thus, the feast day honoring St. John the Baptist was born, being held on June 24.

In the literary world, the most notable occasion of Midsummer by far was made by William Shakespeare. In 1595, Shakespeare wrote A Midsummer Night's Dream, one of his most highly recognized and regarded works. In the play, Theseus of Athens is marrying Hippolyta of the Amazons. Four young Athenians venture into the forest where they fall under the sway of the fey-folk of the forest, led by King Oberon and his wife Titania. In the end, the disputing couples come to terms, reunite, and live happily ever after after their respective adventures. 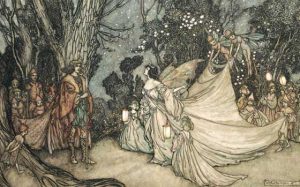 Want to learn more about Midsummer and other holidays? Feel free to check out our catalog, opens a new window for more items on this and other subjects. Happy reading!