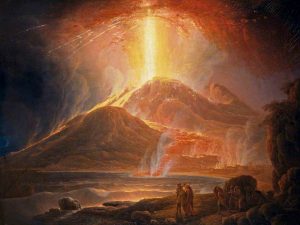 Mount Vesuvius is a volcano located in southern Italy, near the city of Naples. The volcano is renown for the eruption that occurred there nearly two millennia ago.

In 79 AD, Mount Vesuvius surprised Italy with a terrifying eruption that left a mark on history. The exact date of  the eruption is unknown, but scientists believe the event occurred over a two-day period around August 24, according to records left by the only survivor to have written about it, Pliny the Younger. Confusion of the dating stems from other references relating to the event, modern attempts at properly correlating the given date with modern calendars, and archeological evidence that suggests the eruption took place in autumn during the harvest. For now however, official recognition is still on August 24.

In 79 AD, Italy was the core realm of the Roman Empire. Mount Vesuvius had several nearby towns and cities, Herculaneum and Pompeii of note. For months leading up to August, there were several noticable earthquakes. Then, as now, seismic activity occurred very often and did not overly alarm anyone. At the time, no one knew the relation between earthquakes and volcanic activity, and while earthquakes were fairly common, volcanic eruptions were relatively few.

And so, few people heeded the warning of the volcano coming alive. Evidence shows that some people fled, typically the wealthy and powerful, as well as ordinary citizens who were able to move. The majority of people remained in the area where they lived or worked.

The volcanic eruption is remembered for its particular ferocity and magnificence. Historical writers including Pliny comment on the extreme dark of the clouds, the heat of the volcano and the thickness of the ash. Much of the artwork produced in the centuries since then convey similar themes of awe and destruction, as have modern films. 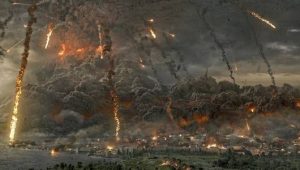 The cities of Herculaneum and Pompeii were quite literally buried under pyroclastic flows of heat, magma and ash. Some experts have deduced that many of the people perished as a result of the extreme temperatures, which even as far as six miles from the vent, were in excess of 250 degrees Fahrenheit. Many people died instantly. These poor victims were then buried in ash, many as much twenty five meters deep. Both towns were rendered uninhabitable and Pompeii's location was forgotten for the better part of fifteen centuries.

The initial rediscovery occurred in 1592 when a local canal architect accidentally unearthed part of Pompeii, before covering it and redirecting his canal around the supposed remains of the city. Pompeii was rediscovered again in 1738 when workers under the employ of Charles of Bourbon, King of Naples, discovered the town. King Charles was quite pleased to learn of the historic site and its ties to the cultural heritage of Naples.

Others conducted excavations of Pompeii over  the years, including Karl Weber, Francisco la Vega and Giuseppe Fiorelli. Fiorelli's dig was the largest yet and eventually uncovered voids in the ash. He realised these curiously shaped voids, roughly the shape of a person in fetal position, were the resting spots of victims who had been buried in ash. Fiorelli pioneered the method of plaster injection that filled these voids, a method still used today with resin. Many of these molds are still found at Pompeii, and can be viewed on tours. 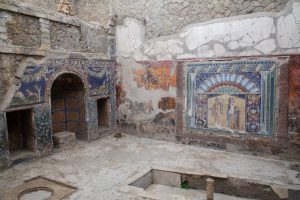 Excavations of the cities gradually revealed the ruins, much of which was preserved rather well. Over the centuries, much of Ancient Rome's architecture had been torn down or renovated to suit more modern tastes. The unearthing of Pompeii gave modern scholars an interesting view into what ancient Pompeii had been like, both in terms of art, as well as what people wore and did in their daily routines. Several buildings were found and identified, including a large market, a mill, amphitheaters, gymnasiums, restaurants, and even a hotel with geothermal hot springs for visitors to enjoy. Archeologists also found clay pots filled with staples of the day, such as grain, olive oil, wine and many other food items.

However destructive and magnificent, the eruption of Mount Vesuvius was not an isolated event. Since the rediscovery, scientists have catalogued a number of dates the volcano has become active and erupted since its birth in 25,000 BC. Although the 79 AD eruption is the largest on record for the volcano, there were also eruptions every few thousand years leading up to 217 BC, when the earliest record of an event appears by Plutarch. Further eruptions occurred in 203 AD, 472, 512, 787, 978, 991, 1007 and 1036. Another huge eruption occurred in 1631, and another twenty two eruptions between then and World War II. 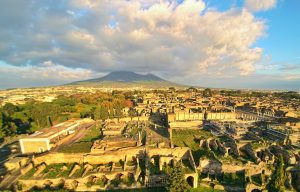 Today, Mount Vesuvius is still considered the most threatening volcano on the planet, largely due to the large amount of inhabitants around the volcano. An estimated 3,000,000 people live near Naples.

Want to learn about Mount Vesuvius and the towns of Pompeii and Heculaneum? Feel free to check out one of the items below or view our catalog, opens a new window for more on this and other topics.

I Survived the Destruction of Pompeii, AD 79

You Wouldn't Want to Live in Pompeii!

The Fires of Vesuvius