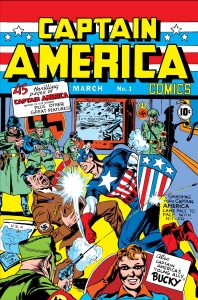 What better way to celebrate America's birthday than a look at the cinematic history of that star-spangled avenger, Captain America?

Captain America's story begins with Timely Comics, prior to the reorganization into Marvel Comics. During World War II, Captain America was one of a variety of new patriotic themed superheroes coming to light, and he was the first such Marvel superhero to receive the film treatment. 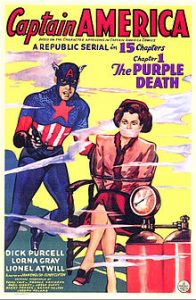 In 1944, Republic Pictures was known for making a variety of movies, mainly westerns and serials. Captain America was one such serialization, and at the time, was the largest such production attempted. Fifteen serial chapters were produced, starting with "The Purple Death" seen above. Dick Purcell starred as the captain, who apart from looking similar to his original costume, also worked as the District Attorney, and utilized a gun instead of his trademark shield. The serials were made on a budget of $182,000 and were considered successes. 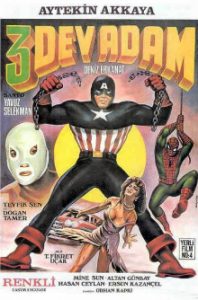 Captain America's next outing was not for another thirty years, in 1973's Turkish film, 3 Dev Adam. Marvel Comics did NOT authorize this production, which featured Captain America as a hero in Turkey as he tries to take down the powerful crime boss known as.... Spider-Man? Spider-Man also has henchmen, uses a gun, and guinea pigs. The film is absolutely as bizarre as it sounds and proved popular enough (in Turkey at least) to spawn more ripped-off adventures that were not authorized either. 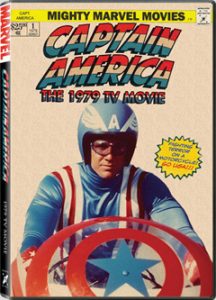 As far as official movies go, the first one to come out in post-war America was the 1979 made-for-TV Captain America movie. This one was not particularly faithful either, basing the title character's costume off of famous daredevil Evel Knievel. Reb Brown stars in this movie as Steve Rogers, the son of Captain America, who takes up the moniker and fights crime. 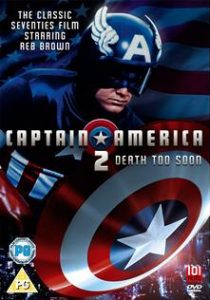 The sequel came out later that year, with Captain America wearing a more traditional costume. Similarly low-budget, the highlight of the movie is Christopher Lee as the movie's villainous General Miguel, involving the theft of Social Security checks and muggers. How dastardly! 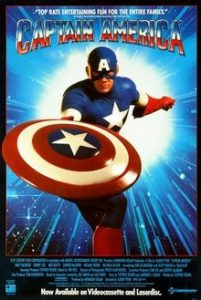 In 1984, The Cannon Group acquired the rights to the character and began production of a theatrical film. After delays, production ultimately passed to 21st Century Film Corporation, which began production in 1989 of Captain America. To be released on the 50th anniversary of the character, the film stars a mostly faithful Matt Salinger as Steve Rogers who volunteers to become a super soldier to fight fascists in Italy and Nazi Germany. Years later Captain America must stop Red Skull again. The film notoriously never released in theaters and instead came out on VHS two years later, and to this day remains the worst reviewed Marvel film on Rotten Tomatoes.

Much as in his life, Captain America stayed on ice for another eighteen years, relegated to being a guest star on certain popular cartoons like Spider-Man in the meanwhile. Captain America emerged from the proverbial ice in the late 2000s when Marvel Studios committed to producing The Avengers and giving life to its own cinematic universe. Plans in the late 90s to produce the film were cancelled and Captain America was reimagined to fit in the universe being built. 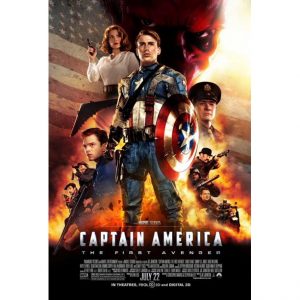 Production on Captain America: The First Avenger began in 2009. Envisioned from the start as a World War 2 film, it features Chris Evans in the lead role, opposite Hugo Weaving as The Red Skull. Joining him in the cast are Hayley Atwell as Peggy Carter, Sebastian Stan as Bucky Barnes, and Tommy Lee Jones as Colonel Phillips, among others. Closely following Captain America's origin, the film seques into the modern day 2011 when Captain America is revived and brought up to speed by Samuel L. Jackson's Nick Fury. Though the film did not perform as well as Thor or Iron Man, it did become the third-highest grossing film set in World War 2 (behind Saving Private Ryan and Pearl Harbor) and paved the way for The Avengers. More on that film later. 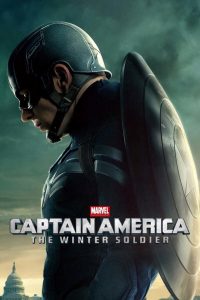 Following The Avengers, Captain America's next outing was 2014's Captain America: The Winter Soldier. Set entirely in the modern day, the movie follows Steve Rogers as adjusts to life today whilst working with S.H.I.E.L.D. to protect America in a post-Avengers world. Production began in 2011 practically as soon as the first film released and while The Avengers was wrapping up its own production. Filmed as a spy-thriller, Chris Evans, Sebastian Stan, and Samuel L. Jackson were joined by Scarlet Johansson's Natasha Romanov, Anthony Mackie as The Falcon, and Robert Redford as the main villain Director Pierce. The film outperformed The First Avenger by a significant margin and is often hailed as one of the best movies of the Marvel Cinematic Universe. 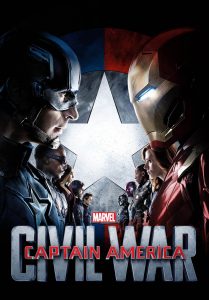 The final Captain America film (though not the last role for the character) was 2016's Captain America: Civil War. Following the events of The Winter Soldier and Avengers: Age of Ultron (again, more on that later), the superheroes are faced with the angry helplessness of ordinary people and governments who demand superheroes be held accountable for their actions, and choosing when and if they should act at all. Joe and Anthony Russo, who previously directed The Winter Soldier and would go on to direct the last two Avengers movies, returned to helm the film. Civil War was by far the most successful film in the Captain America franchise, going on to make over $1.1 billion world wide, surpassing the combined total of both previous films.

That was not the end of his adventures, however. Captain America returned in two more films, which we shall be talking about in our next entry. Happy watching!

Looking for something else? As always, the St. Tammany Parish Library is happy to offer free usage of our online catalog, opens a new window for all of your inquiries. Also feel free to check out our collection of blogs, opens a new window which we write on various topics you may find pertinent.