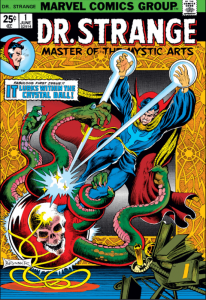 Along with traditional spandex-wearing superheroes, Marvel Comics also found heroics in the form of the mystic arts. Doctor Strange has been a regular protagonist in Marvel Comics since his inception and he has regularly been consulted by numerous heroes regarding magical problems.

The earliest work on a Doctor Strange film began in 1986, with New World Pictures. Nothing came of the attempt, and so another effort was made a few years later. In 1989, Alex Cox and Stan Lee co-wrote a script for Regency and Warner Bros., featuring Doctor Strange battling the extra-dimensional being Dormammu on Easter Island. The project failed to gain traction due to a merchandising dispute between Warner Bros. and Marvel. Charles Band of Full Moon Entertainment optioned the rights for a Doctor Strange Film, but again, nothing came of the project, and ultimately the film was reworked into an independent film called Doctor Mordrid; Doctor Mordrid can best be described as a knock-off, and not a particularly good one at that. Rights to Doctor Strange eventually transferred to both Savoy Pictures and Columbia Pictures in 1995 and 1997 respectively, but still no film surfaced. 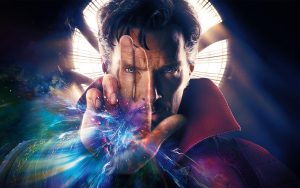 That month, Marvel chose veteran horror film-maker Scott Derrickson to direct the fil. Derrickson pitched a 12-page fight scene to Marvel, presented over 90 minutes to executives and largely self-funded. They hired Derrickson and bought his scene, which later became one of the notable action scenes of the 2016 film. The big wild card for production would be who Marvel cast as the Sorcerer Supreme; from the start, Derickson and Marvel both eyed Benedict Cumberbatch for the role of Steven Strange, but the lauded actor had quite the busy schedule. Other actors were considered for the role, including Jared Leto, Joaquin Phoenix, Tom Hardy, Ewan McGregor and several others. Ultimately, the studio returned to Cumberbatch and negotiated for him to be cast, and even made accommodations for his already busy schedule.

Filming began in 2015 in Nepal, where much of the early scenes were to take place. The rest of the cast proved as lauded as Cumberbatch, including Rachel McAdams as love-interest Christine Palmer, Benedict Wong as Wong, Chiwetel Ejiofor as Karl Mordo, and Tilda Swinton as The Ancient One, among others. With additional set-pieces and an impressive CG-array, the film ended up being made for a budget of nearly $240 million, and released in July of 2016 to the tune of $677 million at the box office. 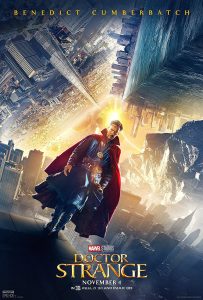 Doctor Strange proved to be a very important film for the Marvel Cinematic Universe. Apart from its breathtaking visuals and meme-inducing final confrontation, the film also found success as a large storytelling benchmark for the film saga moving forward. In the comics, the introduction of Doctor Strange opened readers of Marvel Comics to the mysteries of magic and the various realities of the universe. In much the same way as Thor and Guardians of the Galaxy beforehand, Doctor Strange broadened the scope of the Marvel Cinematic Universe in a similar way, introducing time travel and the mirror dimension into the universe's lexicon, and laying the groundwork for important plot-points in future films. These plot points were instrumental to the stories of Avengers: Infinity War and Avengers: Endgame.

Doctor Strange is not done with the Marvel Cinematic Universe, however. Cumberbatch is returning at the doctor in Doctor Strange in the Multiverse of Madness (allegedly with Elizabeth Olsen's Scarlet Witch) in Phase Five, projected to release sometime in 2021 or 2022, Covid-19 pending.

Stay tuned next month when we discuss some of Marvel's lesser known film outings.

Also feel free to check out our collection of online blogs, opens a new window. The St. Tammany Parish Library Bloggers write about a variety of subjects of interest, and the list is ever-growing.