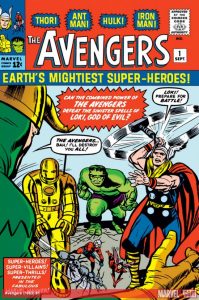 Few phrases are so iconic in modern film as that line right there. The Avengers did not start as a top-tier comic for Marvel Comics, and no attempts were made to produce a film with such diverse characters until the Marvel Cinematic Universe. It was admittedly a monumental task attempting to bring such big characters to live in both a convincing and satisfactory way.

The groundwork for The Avengers began in 2003 alongside development of Iron Man. Avi Arad of Marvel announced plans in 2005 to begin work on a series of films, starting with Iron Man, that would culminate in a team-up film featuring the various main characters against a larger than life threat. One of Marvel's big goals was to use The Avengers as connective tissue between the various stand-alone movies moving forward. Readers are likely familiar with the idea of a shared universe in the comics themselves, where the various series and adventures took place concurrently and had significant effects on what occurred in other movies. For instance, while largely an antagonist against Thor, the God of Mischief Loki has been known to combat other Marvel heroes from time to time. Such would be the case in the 2012 film where, much as in The Avengers #1, Loki threatens the Earth and it's up to the Avengers to stop him. 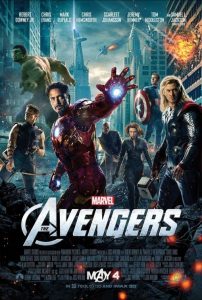 As established in Thor, the Earth (there known as Midgard) was visited not only by Norse deities but also interstellar threats, namely a device called the Tesseract. This item was unearthed by Hydra during the events of Captain America: The First Avenger and later recovered by S.H.I.E.L.D. The film opens at a S.H.I.E.L.D base where the Tesseract is being studied, only for Loki to arrive, steal it, and begin a nefarious plot to conquer the world. Nick Fury brings together the various known heroes of the recent Marvel Cinematic Universe films to combat Loki and put an end to his plans.

The 2012 film broke many box office records, including highest grossing movie, but more importantly it laid the groundwork for future adventures in the Marvel Cinematic Universe. Having proven that their multi-film/property franchise worked, Marvel Studios continued with more upcoming films for Iron Man, Thor, and Captain America, as well as introducing new superheroes and superhero teams. While planned as far back as 2011, work on the Avengers sequel did not kick into high gear until 2013, when it was revealed to be Avengers: Age of Ultron. 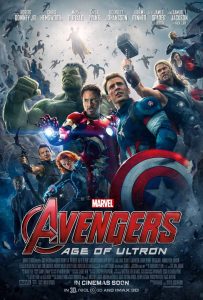 In addition to the entire original cast, new members included the titular villain played by James Spader, Paul Bettany as both JARVIS and new role Vision, as well as Elizabeth Olsen and Aaron Taylor-Johnson as Wanda and Pietro Maximoff, better known as Scarlet Witch and Quicksilver. Not to be confused with the variation of Quicksilver that was also featured in the concurrently produced X-Men: Days of Future Past, this version of the twins featured an origin that set them apart from being mutants, which at the time was highly associated with Fox. Though still a huge hit by any measure, the movie did not perform quite as well financially or critically as the previous film. In the film, the Avengers are challenged by the artificial intelligence Ultron, accidentally created when Tony Stark and Bruce Banner study Loki's scepter, and consequentially must the demented robot from destroying the world.

Although Captain America: Civil War featured a conflict between the politically divided Avengers, it was a couple of years before the next film in the series. Alongside the gradual introductions of the infinity stones as significant plot devices, it was the surprise reveal of Thanos at the end of the first film that really set the stakes for the future. Production of Avengers: Infinity War was announced in October 2014 as Infinity War Parts 1 and 2, laying the promise of a two-part finale. Anthony and Joseph Russo, who directed these films as well as Age of Ultron and Captain America: The Winter Soldier insisted the the two films were distinct entries, and were later renamed to Avengers: Infinity War and Avengers: Endgame. 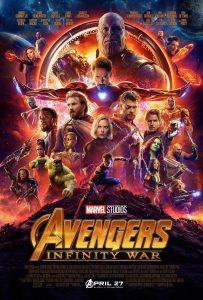 In Infinity War, Thanos has finally decided to seek out the Infinity Stones himself. Aided by his children, the Black Order, Thanos hunts down the various stones in the hands of the Avengers and their allies, forcing the latter to unite and prevent Thanos from achieving his goal. Thanos, played by Josh Brolin, is the main character of the film and the poster villain for the entire Marvel Cinematic Universe up to this point, having been working in the shadows behind numerous plots, including the Chitauri invasion of New York and the attempted theft of the Power Stone in Guardians of the Galaxy. The film was a huge hit, at the time being the fourth highest grossing film of all time, even after adjustment for inflation.

Infinity War ended on a cliffhanger and was not properly finished until the release of Avengers: Endgame. Though filmed back-to-back, Endgame did not release for another year, following Captain Marvel. Endgame picked up shortly after the end of the previous film and involved the efforts of the Avengers to reverse the damage done by Thanos, defeat the villain once and for all, and come to terms with the new world they live in. 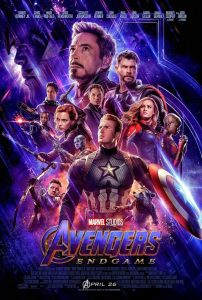 Avengers: Endgame broke records to become the highest grossing movie of all time with $2.8 billion, the second highest in the US after inflation, and the fifth-highest in the world after inflation. Though not quite the end of the Marvel Cinematic Universe's four-phase Infinity Saga (that was actually Spider-man: Far From Home), the film did do a rather good job summarizing and concluding the entire affair, while opening some doors to potential future adventures.

Despite the conclusion, the Marvel Cinematic Universe is continuing, and future films are in the works, including an untitled fifth Avengers film.

Tune in next month when we cover the interstellar heroes known as the Guardians of the Galaxy.

Looking for something else? The St. Tammany Parish Library is pleased to offer use of our online catalog, opens a new window for more information on this and other searches.

Also feel free to take a look at our collection of online blogs, opens a new window written by myself and the other STPL Bloggers. We write about a variety of topics we are passionate about and which may be of relevant interest to yourself.