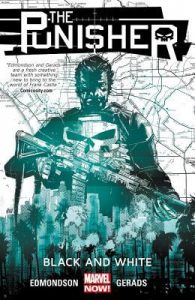 Frank Castle, better known as The Punisher, has not had what one might call a smooth publication history. The same holds true for the various films involving the character. Considering the nature of the comics and films, it is maybe understandable that this became another property that Marvel Studios has struggled to develop for, despite the clamor of fans and a ready market for 80's style heavy action fliks. 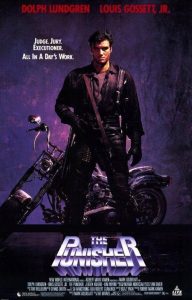 The first film to feature the title character came out in 1989. The Punisher was filmed in Sydney, Australia and directed by Mark Goldblatt. Despite a respectable premier in Germany and a worldwide release, the film never made it to theaters in the United States. Starring Dolph Lundgren, recently famous for roles in Rocky IV and Masters of the Universe, the film follows Frank Castle, an ex-cop who survived the assassination of his family and has since lived a live in New York City dispensing justice to the local mafia. The film received decidedly mixed reviews, critiquing the story, special effects, and the action scenes, while praising Lundgren's portrayal, even if he was not wearing the signature skull shirt. 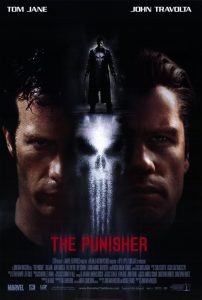 Marvel Studios had a bit more success with the follow-up, The Punisher. Followers of the Retrospective may recall a 15-project deal Marvel Studios had with Artisan Entertainment to develop various films and television series for broadcast. Among those fifteen characters and teams was The Punisher, and Marvel Studios intended this to be one of the first films in their planned run. Marvel hired screenwriter Jonathan Hensleigh to write and direct and Thomas Jane to star as Frank Castle. Unfortunately for the film, The Punisher would only be filmed with half of the usual budget of $64 million for an action film, as well as half of the expected time to film it. Much of the script had to be rewritten to accomodate the changes, and production was delayed a few years. As a result, the film endured certain compromises that perhaps resulted in less than expected results when the film finally released in 2004. Despite following a familiar story (Frank is ex-police/military, family is murdered, he hunts down the mafia for revenge, etc.), the film only made $54.7 million back at the box office, barely enough to cover the production and advertising costs.

Luckly for Marvel, The Punisher had strong DVD sales and rentals. Popular demand paved the way for a follow-up film. Originally envisioned as a sequel, Marvel and Lions Gate Entertainment (who had purchased Artisan Entertainment) began work on a follow-up film. Development stagnated for several years, by which time Marvel's film plans had evolved into the Cinematic Universe. Hensleigh and Jane both lost interest and were replaced, and other staff struggled with the script. In the end, the sequel was scrapped in favor of another reboot, not officially part of the Cinematic Universe as the rights were technically owned by Lions Gate. Instead of being the first Marvel Cinematic Universe film, Punisher: War Zone was the last pre-universe film. 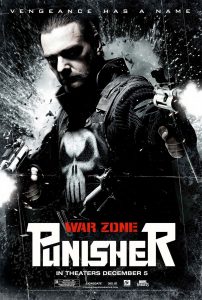 As before, the film follows Frank Castle (now played by Ray Stevenson), former law enforcement whose family was recently murdered by the mob. Believed dead, he takes it upon himself to bring justice to the mob, and various other villains, vigilante-style. Making his cinematic debut is the villain Jigsaw, a mobster horribily disfigured whose scars remind him of a jigsaw puzzle. The villain seeks revenge against Castle for his role in taking down the mobster's crime family, leading to Castle's self-imposed war against crime.

Much like the previous two films, the critics failed to reach a consensus over the film when it released in December 2008. Reviews range from absolutely awful to a middling three out of five stars. Certain reviewers praised the production values, while others complained it was a derivative action film two decades too late. Sadly, against a paltry $35 million budget, it made only $10 million back, certifying the film as a box office flop.

Luckily for Marvel, Punisher: War Zone was not the last nail in the coffin for the studio. Earlier that year in 2008, Marvel Studios released Iron Man to terrific fanfare and accolades. Marvel Studios had their multi-film deal with Paramount Pictures, and work was already well underway for The Incredible Hulk, Thor, Captain America: The First Avenger, and Iron Man 2. Marvel shelved Frank Castle for several years until his next project, which came nearly ten years later. Following the events of The Avengers, Marvel Studios expanded into television, starting with Agents of S.H.I.E.L.D and soon other shows. In Season 2 of Daredevil, Frank Castle finally made his return, now living in the Marvel Cinematic World populated by other heroes (namely the for-television only ones, like Daredevil, Power Man, and he rest of The Defenders).

In 2017, after a few episodes establishing his character, Marvel debuted The Punisher on Netflix. Played by John Bernthal, The Punisher ran for two seasons, recieving less attention than other Netflix shows like Daredevil and Jessica Jones. The Punisher, frankly, was less important to Marvel overall, and was not renewed for a third season. The birth of Disney+ rang a deathknell for the other Netflix shows and the end of that project. Disney and Marvel have since expressed interest at reviving the various shows, including The Punisher, for new lives on Disney+, but it remains to be seen if that will happen, or if any of them will make it to the big screen either.

The Retrospective is reaching its end soon. Stay tuned next time when we cover Marvel's secondary properties.

We also encourage readers to check out The STPL Bloggers, opens a new window. We write about various topics near and dear to our heart, and also of relevant interests to us and our patrons. We are always posting new blogs, so be sure to check us out and see what we're writing about now!