This summer, St. Tammany Parish Library hosted its annual Summer Reading Program. This year's theme was "Libraries Rock!" and featured a variety of events themed on music. Many bloggers have discussed their favorite artists and albums so far. Now I'd like to shed light on one of my own: Celtic Woman. 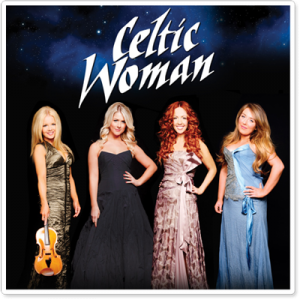 Celtic Woman was founded in 2004 by David Kavanagh, Sharon Browne, and David Downes (who previously worked on Riverdance!). The original line-up were five artists, all female, and all Irish: vocalists Chloe Agnew, Orla Fallon, Lisa Kelly, and Meav Ni Mhaolchatha and fiddler Mairead Nesbitt. They have released numerous albums since 2004 and have won many prestigious awards, including Billboard World Album Artist of the Year six times, and their debut album Celtic Woman held the No. 1 position for Billboard World Music for 81 weeks.

Their music includes favorite folk-songs of Ireland and Scotland, as well as covers of popular modern songs, such as My Heart Will Go On from Titanic and I See Fire from The Hobbit: Desolation of Smaug.

We have many albums available, including:

Much of the Celtic Woman collection is available to listen through Hoopla as well. In addition to the above albums, you can also find:

Songs From the Heart

If you're looking for some great feel-good music, wish to rediscover an old favorite or just try someone new, please give Celtic Woman a try!