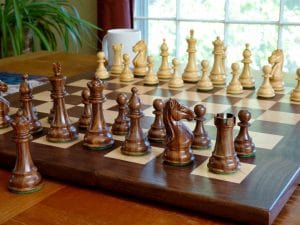 In 1976, President Gerald Ford declared October 9th to be National Chess Day, in observance of the internationally renowned board game.

Though the earliest origin of Chess can be found in 7th century India, Chess as we know it evolved around the 15th century in Spain. By this point, traders and diplomats had spread the game throughout the known world, including China, Korea, Mongolia and Japan in the Far East, the Middle East, Northern Africa, Russia, and virtually all of Europe. Chess was enormously popular, particularly among the royal courts and nobility. Not only was chess fun to play, it could be used as an instructive tool to teach tactics and strategy to burgeoning military commanders and kings. More profoundly, chess offered a vector for even merchants and peasants to play the same game enjoyed by their more affluent neighbors.

Enjoy some choice picks from our collection on this auspicious game:

The World of Chess