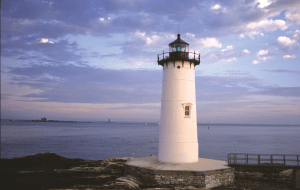 Let's celebrate by honoring some local lighthouses, past and present. 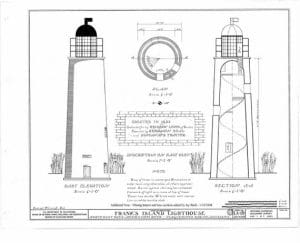 The oldest known lighthouse in Louisiana was the Frank Island Lighthouse. Marking the entrance to the Mississippi River, the earliest planning started in 1803. Numerous delays, including Louisiana changing hands a few times and the War of 1812, forced construction to wait until 1818. By 1823, the lighthouse was finished and remained in service until being replaced by the Pass A L'Outre lighthouse to the north. The building remained unattended until it finally collapsed in 2002.

1837 brought construction of several lighthouses to the area, now that New Orleans was a thriving trade-hub and swiftly growing city. Two of note include the St. John Lighthouse, and the Pass Manchac Lighthouse. 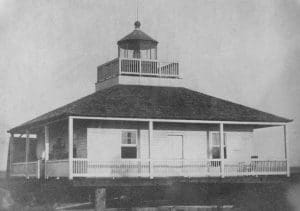 Located on Bayou St. John, this lighthouse marked the entrance of the bayou from Lake Pontchartrain, and leading into New Orleans. At the time, the bayou was a necessary waterway and highly useful for transit into and out of the city. The lighthouse was built on the remains of an old fort, first by the French, then later the Spanish. The site even shows signs of Native American use going back several centuries.

The Pass Manchac lighthouse was built in southern Tangipahoa Parish to mark the mouth of Bayou Manchac into Lake Maurepas, which connects into Lake Pontchartrain. Manchac was a useful site, built by the British in 1763, where Bayou Manchac and the Mississippi River met. It also became one of the first major train stations in Louisiana, and a route from New Orleans to Manchac was completed in short order. The Lighthouse remained in use for several years, being rebuilt in 1857, and finally automated in 1941. The lighthouse faced increasing isolation and fewer traffic, and the lake encroached heavily, until it was officially abandoned and razed in 1952 and officially abandoned in 1987. The remains lingered until 2012 when Hurricane Isaac destroyed what was left. The only remnant, the light itself, had been salvaged and sent to the Lake Pontchartrain Basin Maritime Museum in Madisonville, where it remains on display. 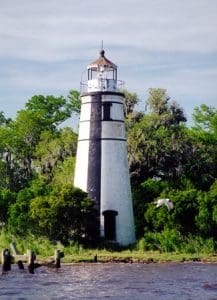 Speaking of Madisonville, the Tchefuncte River was the site of another lighthouse to be built in 1837. The area had been inhabited by Native Americans for centuries, until the Louisiana Purchase and statehood in 1812. The previous year, a new town emerged nearby, Madisonville, named for President James Madison. Congress appropriated $5000 for construction of the lighthouse. The lighthouse remained largely in operation for the next hundred years, despite damage caused during the Civil War and from intermittent hurricanes. Like other lighthouses, the Tchefuncte River Lighthouse was automated in 1937, received solar power shortly thereafter, and the resident lodge was dismantled and moved to the nearby Maritime Museum where it remains. 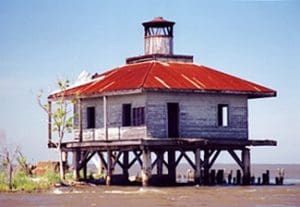 Another lighthouse east across the lake; the West Rigolets Lighthouse was originally one of two planned lighthouses to serve the confluence between Lake Pontchartrain and Lake Borgne. Prior to Louisiana statehood, Lake Borgne was a true lake, surrounded by lands on all sides, and connecting to the Gulf of Mexico by bayous. Since 1812, the eastern end of Lake Borgne eroded away, turning the formerly landlocked water into a lagoon of the Gulf of Mexico, resulting in dramatically increased salinity and a general expansion of Lake Pontchartrain as a whole. As early as 1812, American soldiers erected a fort to monitor the bayou and protect the Lake from potential British incursions. The fort was converted into a lighthouse in 1831. During the Civil War, light house keeper Thomas Harrison died as a result of hostile action, the only such death of a lighthouse keeper during the conflict. The West Rigolets Lighthouse remained manned until 1945 when it was effectively replaced by an automatic light. Eventually the lighthouse was sold, languished with little repair, and fell as a casualty to Hurricane Katrina. 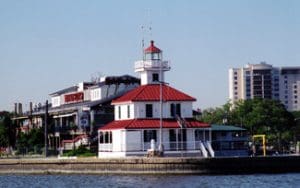 In addition to the Bayou St. John lighthouse formerly located along the lake, another lighthouse also resided nearby. In the early 19th century, New Orleans residents began digging a new canal to service the city, what we now know as the 17th Street Canal. At the lakeshore where the canal met Lake Pontchartrain, the city built a wharf and a new lighthouse, simply dubbed the New Canal Lighthouse. This lighthouse remained in operation throughout the Civil War, changing hands with the fall of the city. Originally built out in the Lake, the city eventually began to expand out, filling in and paving over beach and water, until eventually the lighthouse resided right along the city. It remained in operation until Hurricane Katrina ravaged the area, damaging the structure until it fell apart the following year. A replacement lighthouse was constructed, finished in August 2012, and officially lit on September 26. 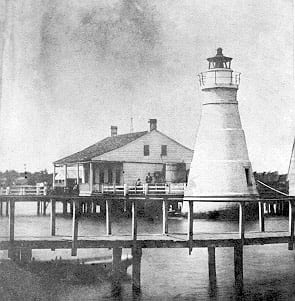 The final stop on our tour is the Port Ponchartrain Lighthouse. This lighthouse was conceived and constructed by 1839, one of three serving Lake Pontchartrain. Originally constructed for Alexander Milne, who wished to create a resort town north of the city, named Milneburg. Originally located along the lakeside, Milneburg did not last as an independent community, and eventually was swallowed by the growing city. The New Orleans Levee Board introduced significant plans for land reclamation along the coast, expanding the available terrain out into the lake. By 1939, the lighthouse was closed and the surrounding area taken over by the Pontchartrain Beach amusement park. The park closed in 1983, and the lighthouse and land around it transferred to the University of New Orleans.

That wraps up our look at the local lighthouses. There are of course many other lighthouses in Louisiana and the United States. In the comments below, feel free to tell us about your favorite lighthouse.