November is National Native American Heritage Month. Throughout the month, populations across America pay respect to and honor the various tribes of natives that called, and continue to call, our nation home.

Did you know that St. Tammany Parish had natives when the first European settlers arrived? Evidence suggests that human beings have lived in the area for thousands of years! 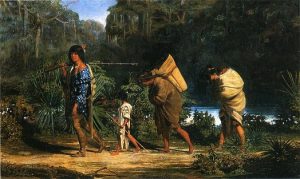 The early European explorers of St. Tammany Parish found two tribes of natives: the Acolapissa and the Choctaw. The Acolapissa were truly local, and lived not far from Pearl River; their descendants still live nearby! The Choctaw were far more numerous and lived throughout the parish and West Florida in general. Early historians like Pere Adrien Rouquette recognized the shared language and customs between the Acolapissa and the Choctaw. Over time, the distinctions between the two tribes has lessened, and remains debated by scholars.

Other tribes were also attested to have lived in the area, including the Quinipissa, Mougolacha, and Bayagoula. By the early 18th century, most of  the members of these tribes ceased to exist, whether by conflict, disease, or emigration.

As the decades went on, many of the natives either integrated into the burgeoning colonial society of New Orleans and St. Tammany Parish, relocated, or simply died out. In 1830, the Treaty of Dancing Rabbit Creek was signed, wherein most of the Choctaw nation exchanged their lands to the United States and moved to the Indian Territory, in what became Oklahoma. A provision in the treaty remained, allowing for those who did not wish to leave to stay, retain some of their lands, and become citizens. These Choctaw became the first non-European ethnic group to gain United States citizenship.

Interested in reading about the Acolapissa, Choctaw, and their interactions over the years with our forebears? Feel free to check out one of these books:

The Choctaw of St. Tammany Parish

We also have other books available to view by visiting our libraries in person:

Many of the Acolapissa and Choctaw opted to remain in St. Tammany Parish, as evidenced by the many residents today who live near Bayou Lacombe, Pearl River, and other towns. Despite the Treaty of Dancing Rabbit Creek, many hundreds of natives still lived in St. Tammany Parish during the 19th century. In 1859, Adrien Rouquette of New Orleans became a missionary in service to the local natives. He established several chapels and wrote much of their customs and way of life until his death in 1887. They called him Chahta-Ima, which translates to 'Like a Choctaw.'

There are many locations in St. Tammany Parish named after or by the local Native Americans. Young students in Lacombe can attend Chahta-Ima Elementary, and several rivers have local names as well, including Abita, Tchefuncte, and Bogue Falaya. There are many people alive today, particularly near Lacombe and Pearl River, who can trace ancestry to one of the tribes.

We hope you learned something new by reading this article. Feel free to browse our catalog if you want to learn more about Native Americans. Please leave a comment if you have Native American ancestry from one of our local tribes!