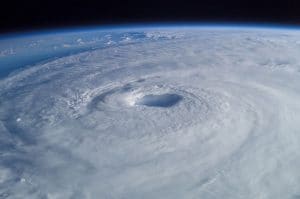 Hurricane season may officially start on June 1, but things usually do not start heating up until mid-July. In recent years, more and more storms have begun appearing earlier in the season, and many of these storms have been stronger than the historical record.

A hurricane is a name for a tropical cyclone, a storm that originates in the tropical latitudes of the world, typically over warm water. While Americans call these storms hurricanes, they go by other names in different parts of the world, such as typhoons in the Western Pacific. Hurricanes and typhoons are nearly identical in that they are very large storms that spin around a central 'eye', but the biggest difference is the direction of their rotation, due to the Coriolis effect.

In decades past, coastal populations often did not learn about impending hurricanes until they arrived. This was the case of the infamous Galveston Hurricane in 1900. Though originally spotted over the Leeward Islands and Cuba, the United States Weather Bureau determined that the storm would strike Florida, with less than hurricane-strength winds. The residents of Galveston, Texas enjoyed a blissful few days of pleasant weather, unaware the storm possessed 140 mph winds and was barreling their way. Before residents knew it, the storm roared ashore, becoming the deadliest natural disaster with over 6,000 dead at least.

As the years have gone by, advancements in aircraft, communication, meteorology and even satellites have multiplied humankind's understanding of such storms, as well as our abilities to both track and predict them. Today, weather satellites can provide instantaneous views of the Earth below, spotting these storms as they form hundreds of miles out to sea.

If you would like to learn more about such weather activities, there is no better place to look than NOAA.GOV. The National Oceanographic and Atmospheric Administration keeps a tireless eye on both the Atlantic and Pacific Oceans. It is also a wonderful resource on science in general. For many years, NOAA used to publish and distribute hurricane-tracking charts, often available for free at convenience stores or even in the newspaper. Today, NOAA maintains a website for the National Hurricane Center, where they track all storms live and provide advisory notes.

In the meantime, feel free to check out some of our own sources:

Hurricanes of the Gulf of Mexico

We hope you have a safe, informed, and hopefully short hurricane season!

Looking for something else? As always, the St. Tammany Parish Library is pleased to offer free use of our online catalog, opens a new window for more information on this and other topics.

Also feel free to check out the STPL Bloggers, opens a new window. We are always publishing new articles on topics of interest. Stay tuned for the next one!