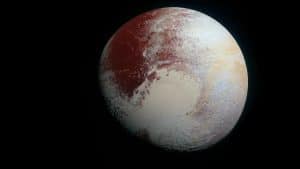 Pluto holds a special place in the heart of both professional and amateur astronomers. Pluto was originally discovered in 1930 by Clyde Tombough and first theorized to exist in the 1840s; it was the only planet discovered by an American. Named after the Greek god of the underworld, Pluto reigned as the 9th planet and the farthest known object in the solar system along with its small moon, Charon.

Pluto is so small and remote that even the best telescopes and instruments in the 20th century could not clearly make out Pluto's size for several decades. Scientists thought that Pluto was roughly the size of Earth, but, as the years went by, further calculations revealed it was far smaller... smaller even than our moon! Wait, a planet smaller than a moon? That sounds bizarre.

Pluto's story took an interesting twist in the 1970s when astronomers realized that there were too many gravitational distortions on Uranus and Neptune's orbits to be fully explained by the presence of Pluto. This meant that there had to be more as-yet-undiscovered bodies of significant gravity and size. Scientists continued peering out beyond Pluto and in 1978 discovered the first of its five moons, Charon. Charon, like Pluto, turned out to be round and relatively large enough that the two bodies orbit each other, rather than one around the other, at an off-center point in space. This type of orbit relationship is not repeated between any other moon and planet of note.

And yet, the addition of Charon still did not fully clarify the problems with Uranus and Neptune's gravity and orbits. Pluto and Charon, even combined, lacked the mass to greatly affect the two much larger planets. Stranger than this even, Pluto and Charon did not orbit the Sun along the same elliptical as the rest of the planets; rather than going about the tremendous invisible track like the other planets, Pluto orbits at a slight angle that goes much further out but also occasionally within the orbit of Neptune. Clearly, Pluto was either so far away as to not have a fully stabilized orbit, or it possesses a younger orbit that has not settled for nearly as long as the other planets. More and more evidence was adding up that Pluto wasn't just the youngest of the discovered planets, but it was also the strangest.

Everything changed with the discovery of 15760 Albion in 1992. Scientists continued to peer out into deep space around Pluto to look for some sign of celestial bodies out there. First identified as 1992 QB1, 15760 Albion was the second object to be found in the space beyond Neptune after Pluto and Charon. In the intervening years, astronomers discovered even more objects of varying sizes: the Kuiper belt, which was named for Gerard Kuiper. Many of these objects were along similar planes as Pluto and close enough to be termed 'in the neighborhood' of the planet. Earth occasionally has visits from assorted asteroids, but the immediate space around Earth and most of the other planets is empty, barring their moons.

By now, a clear trend was building: Pluto was so different from other planets that some astronomers weren't convinced that Pluto really was a planet. No vessel or probe had ever visited the planet yet. In 1992, shortly after the discovery of 15760, Robert Staehle of the Jet Propulsion Lab proposed sending a probe to visit Pluto. The vessel, which was named New Horizons, was constructed and due to launch in early 2006, but not before another momentous discovery. 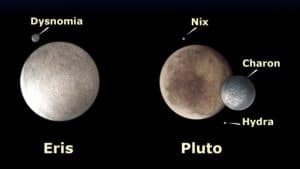 In 2005, Mike Brown of the Palomar Observatory found another object dubbed Eris. Eris was also in the Kuiper belt, almost as large as Pluto, and even more massive. Eris had a moon named Dysmonia and followed a very bizarre orbit. Finally, Eris was somewhat surrounded by other objects. Rather than being alone in their orbits, Pluto and Eris were surrounded by no less than 2,000 other objects, all composed of rock and ice, in varying amounts. These objects located in the Kuiper belt are collectively known as TNOs: Trans-Neptunian Objects.

2006 ended up being the proverbial 'straw that broke the camel's back'. Faced with mounting data that questioned Pluto's significance in the solar system, the International Astronomical Union met to formally define what exactly constituted a planet. Some 424 members of the 9,000-member community agreed to a formal definition:

While Pluto does orbit the Sun and is large enough to be a sphere (or close enough), it has not dominated its orbit and is far from being the giant of the Kuiper belt. In comparison, the eight planets of the solar system are far and away the dominant forces in their orbits and out-mass everything else by huge proportions. Making matters worse for it, Pluto and most of the TNOs are resonant with Neptune's orbit. They orbit thrice around the Sun for every two of Neptune's orbits and in elongated orbits to boot. In fact, Pluto's eccentric orbit occasionally takes it within the orbit of Neptune. This kind of orbit is not repeated by the planets. 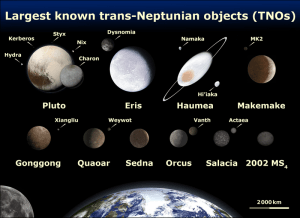 At the same time, the IAU defined a dwarf planet as a planet that orbits the sun and has a spherical shape--essentially just bullets one and two. Pluto might not be an official planet, but it suddenly found itself as the undisputed ruler of the dwarf planets, ruling over Eris, Haumea, Ceres, and the rest. Of course, not all scientists agree with either definition; some are quick to point out that the 2006 ruling did not garner votes from the majority of their membership. In New Mexico, lawmakers passed a resolution declaring that Pluto would be considered a planet at any time it rests in the New Mexican sky.

Would you like to read more about Pluto? Feel free to check out some of the available items below. Happy reading!

How I Killed Pluto and Why It Had It Coming, opens a new window

Pluto and Other Dwarf Planets, opens a new window

To Pluto and Beyond, opens a new window