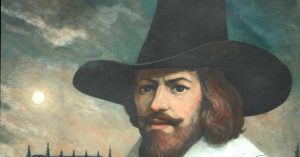 Who was Guy Fawkes, you ask?

In 1605, many English Catholics were unhappy with the rules of King James I. Frustrated by lack of support for the Catholic Church and its followers, several nobles plotted to revolt. Central to their plot was the plan to blow up the House of Lords during the opening session of Parliament, killing James I and the assorted nobles in attendance. Guy Fawkes was one of the prominent members of the conspiracy, and due to his extensive military experience fighting for the Spanish, was in charge of procuring and guarding the thirty one barrels being stored under Parliament.

On October 26, one of the conspiracy members sent a letter to William Parker, Baron Monteagle, revealing the conspiracy and its plans. On the evening of November 4, Guy Fawkes was discovered at his cache and arrested, and the gunpowder removed. Fawkes' fellow conspirators attempted to flee London, but were trapped at the Holbeche House, where the supposed leader, Roberty Catesby was shot and died. After trial, the eight surviving plotters, including Fawkes, were declared traitors and ordered to be hung, drawn, and quartered. 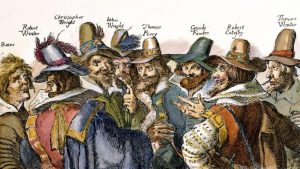 Although the guards foiled the Gunpowder Plot, anti-Catholic resentment did not vanish. In the aftermath of the trials and executions, numerous pieces of anti-Catholic legislation passed Parliament. Further, November 5 became a state holiday, celebrated annually. It has since been known as Guy Fawkes Night, Gunpowder Treason Day, Bonfire Night and Pope Day. As England established colonies in North America, the Caribbean, and Australia, many of these colonies expressed their own traditions on November 5.

There have been numerous poems and songs put down about the Gunpowder Plot. You can read the English poem, circa 1870, here., opens a new window

During the American Revolution, anti-Catholic attitudes still prevailed over much of New England, where Pope Day and Bonfire Day were both being practiced. Despite his distaste for the burning of effigies, George Washington proclaimed an edict banning such celebrations in the Continental Army. From that time on, the holiday has been practiced less and less, although occasionally it remains a convenient day to criticize and mock relevant politicians and leaders. 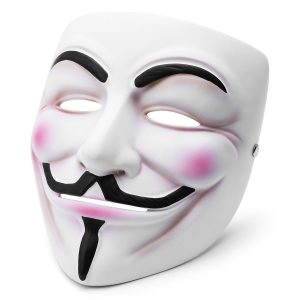 Curiously, Guy Fawkes has been immortalized in a mask, based on his face. Such masks have been common for decades in November 5 celebrations, on both sides of the argument. While November 5 is a national observance in England, it has also become a day of protest against perceived injustice and tyranny, especially by government. Of late, the mask has also gained popularity during Halloween, particularly because of a certain comic book and movie.

In 1982, famed comic book writer Alan Moore penned V for Vendetta. In the near-future, nuclear war has devastated the world; England is now a police state led by the fascist Norsefire political party, an entity sharing similar supremacist views as Nazi Germany. V, the titular hero, is an anarchist and a rebel who dons a Guy Fawkes mask in his quest for revenge against his former captors and in bringing down the corrupt state and espousing the virtues of anarchy while training reporter Evey Hammond to follow in his footsteps. The centerpiece of the comic is V's plan to destroy Parliament with explosives, in the manner of Guy Fawkes, on November 5. 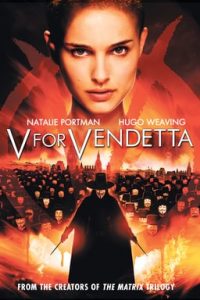 In 2005, Warner Bros. adapted V for Vendetta for cinema. The film covers the same ground as the comic it is based on, with Evey Hammond portrayed by Natalie Portman and V by Hugo Weaving. Despite certain creative changes, the film enjoys great success, and remains one of the better received movies based on comic books. It's hard to argue against the style of the Wachowski siblings and Hugo Weaving's enthralling delivery!

So remember the Fifth of November, and never forget the Gunpowder Plot. 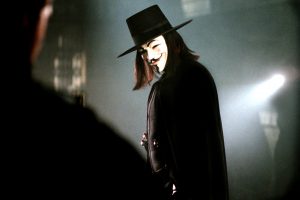 Looking for something else? The St. Tammany Parish Library is always happy to offer use of our online catalog, opens a new window for more info on this and other subjects.

Also feel free to check out our collection of online blogs, opens a new window . The St. Tammany Parish Library Bloggers are always writing about various topics and events they feel passionate about, so check us out and see what we have to offer!