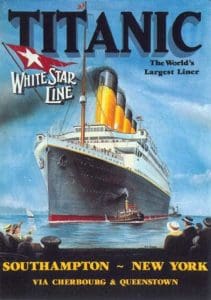 Few things capture the imagination quite like an ocean liner. Among ocean liners, one name stands head and shoulders above all others. Infamous for being 'unsinkable' and going down on its maiden voyage: the RMS Titanic.

The Titanic was originally ordered in 1904 by White Star Line as part of their Olympic-class of oceanic liners. The Olympic-class, including Olympic, Titanic, and Britannic, were to be the largest and most luxurious liners in the world. Titanic was built in Belfast, Ireland under designs by Thomas Andrew. The ship launched in 1911. 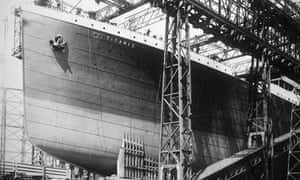 The Titanic had many state-of-the-art features for its time. For instance, the ship boasted:

In addition to these innovations, the ship also boasted the most talented crew in their respective fields including the Captain, sailors, wireless operators, engineers, stewards, mail clerks, and many others. People clamored to work on the ship and White Star Line could afford to hire the best of the best.

The Titanic also enjoyed numerous amenities, although many were limited. First-class ticket holders could enjoy:

Ocean liners have come a long way since the Titanic sunk on April 14, 1912. Amidst the grief and outrage of the incident, much good came from the disaster in the form of new regulations. Ships were required to provide enough lifeboats for a majority, if not all, passengers and crew. Lifeboat drills and emergency procedures also became commonplace. Radio equipment was to be manned constantly as well, as one of the fatal flaws that night resulted in the radio members on several ships being away from their post. Most enduring, the International Ice Patrol and the International Convention for the Safety of Life at Sea were both established and remain in effect to this day.

Want to learn more about the RMS Titanic? Feel free to check out some of these items below:

We also have movies and literature inspired by the Titanic:

Tonight on the Titanic

I Survived the Sinking of the Titanic, 1912

Looking for something else? The St. Tammany Parish Library is happy to offer our catalog, opens a new window for all of your inquiries. Bon voyage!