It's Science Fiction Day again, and this year I am covering one of my favorites: 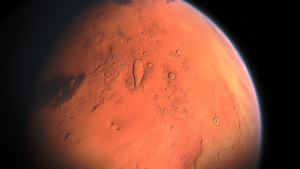 Andy Weir wrote The Martian as his debut novel in 2011. Originally self-published, the story covers a fictional, but highly plausible, mission to the Red Planet by astronauts. An unexpected sandstorm forces the team to leave early, but Mark Watney is hit by debris. Believed dead, he is left on the planet only to awaken a few hours later having survived his wound. Finding himself alone, Mark must find a way not only to survive the hostile climate, but also to somehow make it back to Earth.

The book features three narrative points of view: Mark Watney, his fellow crew, and the various NASA members back on Earth. Watney's chapters are entirely written in journal format; part of the crew's training involved making video diaries to record their progress and as a means of communication, as it takes several minutes just to contact Earth one-way. The spaceship crew are understandably upset at leaving their fellow crew member, while the residents of NASA wrestle with the logistical and moral implications of retrieving the stranded astronaut.

Much of The Martian's text is given over to Watney's problem-solving. Stranded on the planet, the astronaut must think of ways to feed himself, conserve power, air, and water, and maintain communication with NASA. Weir, through Watney, provides readers with a wealth of plausible solutions, communicated in technical jargon and common parlance, so readers always know what is going on, whether they have degrees in science or not. Beyond that, it is also fun watching Watney just deal with his frustrating situation and seeing the efforts he and everyone else goes to save him.

The book received numerous accolades after publication. The Martian spent 76 weeks on the New York Times best seller list, twelve of those weeks as #1. The audiobook version won the 2014 Audie Award in Science Fiction, and Weir won the 2016 Best New Writer at the Hugo Awards.

After being re-published by Crown Publishing, 20th Century Fox produced a film adaptation of the book. The film, directed by Ridley Scott, stars Matt Damon as Mark Watney. Damon is joined by a stellar cast, including Sean Bean as the Hermes mission flight director, Jessica Chastain as the team commander and Jeff Daniels as the Director of NASA, among others. Weir and Scott collaborated with NASA to develop the science and technology depicted in the movie. The film won numerous awards, including and not limited to:

If you haven't already, feel free to check out a copy of The Martian in the format of your choice!

Looking for something else? The St. Tammany Parish Library is always happy to offer use of our online catalog, opens a new window for more information on this and other topics. Happy reading!