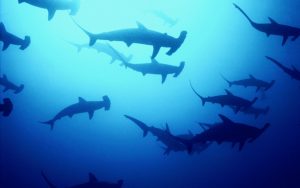 Sharks are renowned throughout the world as being among the top predators in the ocean. Though they mainly eat fish, turtles, seals and other aquatic life, sharks have also gained a reputation for attacks on humans.

Over the years, scientists have learned a lot about sharks of all kinds, from the infamous Great White to the relatively placid Nurse Shark, from the bizarre hammerhead sharks to the largest fish of them all, the Whale Shark!

In honor of one of the most popular weeks on television, and everyone's favorite predatory fish, here is a list of books all about sharks!

I Survived the Shark Attacks of 1916

Shadow of the Shark

We also have several e-books on sharks, including:

The Truth About Great White Sharks

Remember that sharks are animals, not monsters. They have habits and instincts, and even a social side to them. Remember these amazing creatures and the troubles they face now and in the future.