The story behind Santa goes back to the third century during the time of St. Nicholas, a monk, even though some sources state that he was a bishop. Nicholas was born around 280 A.D. in Patara, in modern-day Turkey. Legend states that Nicholas had a giving spirit and traveled the countryside helping those less fortunate and the sick. Nicholas's parents were wealthy and left the bulk of their estate to Nicholas when they died. Nicholas, who always had the spirit of giving, took his inheritance and gave to those less fortunate and lived a life of humility. December 6 marks the anniversary of Nicholas's death. By the time of the Renaissance, St. Nicholas was the most popular saint in Europe. St. Nicholas was canonized by Pope Eugene IV on June 5, 1446 and became known as the patron saint for children and sailors.

Waves of European immigrants brought St. Nicholas's holiday tradition to America. By the end of the 18th century, St. Nicholas was recognized by American culture. In December of 1773 and December of 1774, it was reported that groups of Dutch families in New York gathered to honor the anniversary of Nicholas's death. The name, Santa Claus, was stated to evolve from Nick's Dutch nickname, Sinter Klaas, a shortened form of Sint Nikolaas, which is translated as the Dutch name for St. Nicholas.

Gift giving, a custom that was passed down from St. Nicholas's generosity in helping others has been a part of the Christmas tradition since the early 19th century. In the United States, stores advertised Christmas shopping in 1820, and by 1840, United States newspapers were carrying Christmas advertisements, featuring Santa Claus. In 1841, many children traveled to Philadelphia to see a life-size Santa model. The lure of Santa and Christmas giving were becoming popular in the United States. The Salvation Army in the early 1890's started sending unemployed men in Santa suits to solicit donations for needy families to provide them with Christmas meals. Salvation Army Santas have been ringing their bells on street corners and in front of stores to gather donations for the needy since the start of this tradition.

A noteworthy Christmas poem, "An Account of a Visit from St. Nicholas", was written by Clement Clark Moore, an Episcopal minister for his three daughters. This poem later became known as "Twas the Night Before Christmas." Moore was hesitant to publish the poem due to the subject of the poem. Publication of the poem led to the popular version of Santa as a "jolly old soul" with a portly figure and the ability to climb down into chimneys to leave presents under the trees for good boys and girls. After leaving presents at one house, he would dash away to another house on his sleigh being drawn by eight flying reindeer. 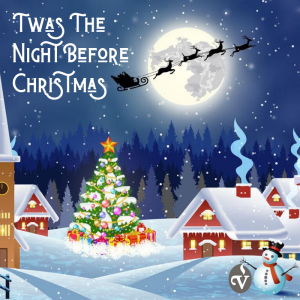 Santa's images went through many transitions during the years. Santa wasn't always illustrated as a jolly soul with a red coat, rosy cheeks, big white beard, portly belly, and black boots. Prior to 1931, Santa was illustrated as a tall gaunt man or a spooky-looking elf. During one point in history, Santa's clothes varied from a bishop's robe to a Norse huntsman's animal skin clothes. During the Civil War, Thomas Nast, a cartoonist, drew Santa for the Harper's Weekly as a small elf-like figure who supported the Union. In later years, Nast transitioned Santa's coat from a tan coat to a red coat, a color that is currently used for Santa's clothing.