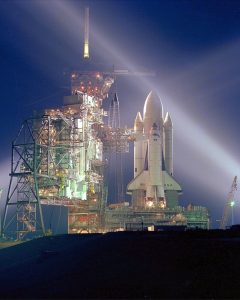 Spaceflight has been the newest and most exciting frontier in human exploration. Following the successes of the Mercury, Gemini, and Apollo programs in proving man could get to space and explore in reasonable safety, NASA needed to follow up with a new program. By 1972, many Americans who had once sat captivated to watch the Apollo 11 moon landings had found the trips routine and, dare we say, boring. With Apollo 17 as the final mission, NASA needed a new program and new technology to see mankind forward into the future.

As early as the 1960s, NASA was already looking forward to that future. The Saturn V rocket was tremendously powerful, but overkill for NASA's plans about operating and exploring in 'low Earth orbit'.  There were commercial, exploratory, and military reasons to stay much closer to Earth and not go to the Moon, and a less powerful rocket would perfectly suffice. Even more important to NASA and the federal budget was the need for a cheaper, reusable system that would turn space travel into truly routine trips. Thus, the space shuttle was envisioned.

After 1972 and the end of the Apollo Program, NASA announced the space shuttle.

The space shuttle was designed similarly to a jet, featuring a cockpit, fuselage, wings, and an engine. The shuttle was launched into space with the aid of three rockets, one large expendable tank, and two smaller and reusable booster rockets. These rockets worked together to put the shuttle into orbit, where it could then maneuver more or less on its own. The Apollo capsules only carried three astronauts into space, but the space shuttle was designed to carry as many as ten people at once, along with a very large cargo bay for launching and retrieving manmade satellites. There were even plans for optional seating for up to 70 passengers, truly earning the term 'shuttle'. 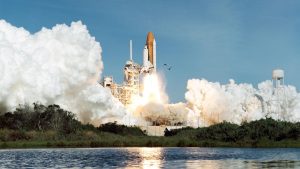 The purpose of the shuttle was twofold: operating in low-Earth orbit, the shuttle would primarily be used to help launch or repair satellites, and to help construct a new space station, to replace Skylab and Russia's Mir space station.

The first two shuttles to be constructed were Enterprise and Challenger, both used as test vehicles to study how the finished shuttle designs would work. The first space-worthy shuttle was Columbia, delivered to NASA in 1979 and first launched in 1981. Challenger was fully converted into working transport and became the second vehicle in 1982, followed by the purpose-built Discovery in 83, Atlantis in 85, and Endeavor in 91. Combined, the five shuttles flew 135 missions from 1981 to 2011.

Unfortunately, not every space shuttle mission enjoyed success. In 1986, not even two minutes after liftoff, a dangerous accident caused one of the solid rocket boosters on Challenger to fail and rupture. The faulty part, a damaged O-ring, led to the total destruction of the craft and the loss of all astronauts. 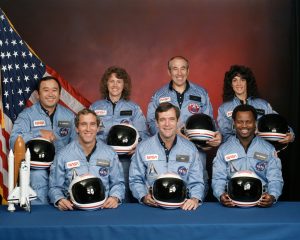 Years later in 2003, another accident occurred. Columbia, now twenty years old, suffered damage to several of the heat shield tiles on the shuttle during take off. While the crew made it into orbit and completed their mission, the return trip ended prematurely when the shuttle failed to properly shield heat during re-entry. The craft broke apart, again with a loss of all lives on board. 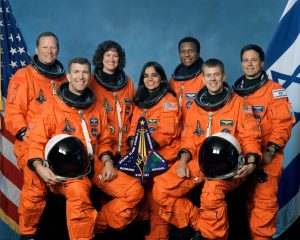 It was evident, after more than twenty years of service, that the space shuttles could not last forever. Though pressed further into service beyond their initial plans, retirement nonetheless beckoned. In 2004, President George W. Bush announced the official retirement of the space shuttle following the completion of the International Space Station. The program's final mission was one final service and upgrade mission of the Hubble Space Telescope, before returning to the ground permanently in 2011.

The space shuttles have remained retired and have all been decommissioned and sent to various museums across the country. Until 2020, NASA and European astronauts relied on Russian Soyuz rockets to continue going back and forth to the International Space Station, until the advent of private corporations such as SpaceX and Cygnus successfully launched their own man-made rockets.

As for what NASA has done in the meantime since the retirement of the space shuttles, readers can look forward to an article on the Artemis Program.