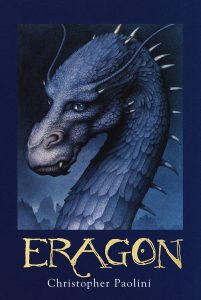 This month, a blog about one of my more recommended reads, particularly for teens getting into fantasy.

Eragon is a novel with a storied development and publication. The author, Christopher Paolini, grew up in rural Montana, near Paradise Valley. He began writing in 1997, at the age of 14, and worked on the original version of Eragon, which his parents published under their own printing label, Paolini LLC. Eragon was eventually discovered a few years later by Carl Hiaasen (Hoot, Razor Girl), who got in touch with publisher Alfred A. Knopf. Knopf contacted Paolini and Eragon was edited and republished with the familiar art of Saphira, his faithful dragon.

Eragon tells the story of the titular character, Eragon, an orphaned farm boy born and raised in a remote corner of the Empire. The Empire covers a vast swathe of territory through the fictional continent of Alagaësia, where Emperor Galbatorix rules over the mostly human population and "protects" them from the dangers of the rebel nation Surda, the alien dwarves and elves who also call the continent home. Galbatorix is a dragon rider and a tyrannical despot, who came to power by overthrowing his fellow dragon riders in a terrible war that results in most dragons and their riders dying at the hands of Galbatorix and his cohorts.

In the same vein as Star Wars and other traditional fantasy adventures, Eragon is a coming-of-age story about a boy who dreams of a greater life and finds himself surrounded in events he never thought possible. Complete with wise old mentor, clever allies, his 'steed' Saphira and his magic sword, Eragon hits all the familiar notes fans of fantasy stories are experienced with. Eragon is easy to read, moves at a fairly quick pace and is very relatable for young readers who crave adventure.

Paolini also takes the time to develop Eragon's world, explaining things like how magic works. The author includes a glossary of invented words, where he explains pronunciation, definition and even the origin of his words and languages. There are times in the book where Eragon spends time exploring his new environs, meeting people, interacting with the world, and learning. Through Eragon, readers are transported into the world of the book and can experience through Eragon what this world is like. Paolini's world-building makes his book feel alive.

Though it may come across as a tad cliche and perhaps even simple when compared to the quality of other young adult fiction writers, Eragon stands out as a unique little gem that demonstrates the rewards of perseverance and showing that young writers can make their mark in literature if they work hard enough at it. Paolini's debut novel holds up well and will be a treat to teenagers wanting to explore fantasy from a young adult perspective; better yet, his follow-up books are even better, but that's a discussion for another blog.

Want to read more of Christopher Paolini's works? You can check out our catalog right here. May the stars watch over you!