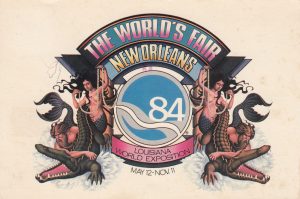 The 1984 World's Fair was hosted by New Orleans. I remember seeing the items from our outing to it around the house for years after. I had the little coin purse embellished with the World's Fair mascot, a pelican named Seymore D. Fair. I kept it in my keeping until Hurricane Katrina, anyway. I now collect any World's Fair memorabilia I find to both commemorate the bygone time period and the World's Fair I had the good fortune to attend with my family.

This year marks 1984 World's Fair thirty-fifth anniversary. The fair opened on Saturday, May 12, 1984, and ended on November 11 of that same year. The fair was plagued with attendance and other issues and was the only World Expo to declare bankruptcy during its run. It was also the only fair to have a mascot and the last World's Fair to be held in the U.S. If you went and would like to relive it or if you are interested in it and would like to travel back to the 1984 New Orleans World's Fair and learn what it had to offer, there are a few resources for you to check out on the subject at the St. Tammany Parish Library.

A World's Fair to Remember

Treasures of the Vatican