Welcome back to Anime April! Never heard of Anime April? Clickthis link, opens a new window to check out the first entry.

So far this month, we have demonstrated the variety of genre and topics covered by Japanese animation. This week we continue that trend with a look at science-fiction works! 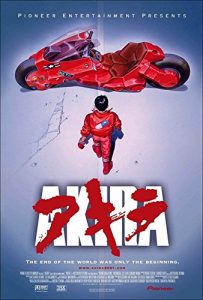 World War III begins in 1988 when Tokyo, Japan is annihilated in a blinding cataclysm. Thirty one years later, 2019 in fact, Neo Tokyo is alive and well. The government harbors a dark secret: some people have gained fantastic psychic powers, and their abilities threaten the status quo of the world.

Biker gang-member Shotaro Kaneda learns this when his childhood friend, Tetsuo Shima, crashes into a runaway esper and triggers his own psychic abilities. Tetsuo revels in his new powers and creates chaos, while loyal Kaneda tries to save him, or failing that, take him out.

Akira was a landmark film when it released in 1988. In addition to the praise the film earned for its technical and directoral merits, Akira also helped popularize anime for adult-audiences in the United States and inspired numerous other works, including Ghost in the Shell, opens a new window and The Matrix., opens a new window 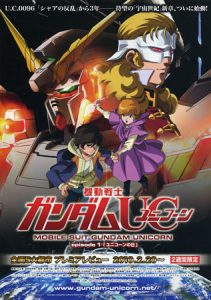 Mobile Suit Gundam Unicorn is a celebration of the Gundam franchise. Set after the last of the original series, Mobile Suit Gundam ZZ, opens a new window, Unicorn tells a new story set in that timeless universe. An ordinary schoolkid, Banagher Links, saves a girl he runs into, Audrey Burne, from mysterious assassins. In his effort to protect her, he stumbles across the Unicorn Gundam and becomes its new pilot. Thrust into a war he did not ask to be part of, Banagher must protect Audrey and the space colony he calls home from the Principality of Zeon.

The series was originally produced as a manga from February 2007 to August 2009. A year later, Sunrise Inc. produced this seven-episode original video animation. Released years after the original manga and show, and many of its following series, Unicorn contains references galore, treating fans to treats from Gundam, Zeta Gundam, or Gundam ZZ, or alluding to events that take place later. The animation is top-notch, and the complex story about war, justice, revenge, and consequences makes Mobile Suit Gundam Unicorn a compelling series. 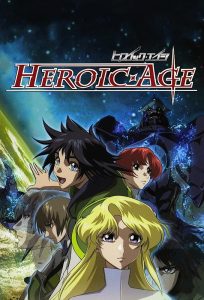 Heroic Age is a "best of both worlds" for fans of space opera, drama, and giant robots and monsters. In the distant future, humanity (known here as the Iron Tribe) is at war for control of the known universe. They fight to defend themselves from annihilation at the hands of the Silver and Bronze Tribes, while striving to obtain the secrets that elevated the Gold Tribe to godhood.

Roughly based on the The Twelve Labors of Hercules, opens a new window, Heroic Age is portrayed from the point of view of Dhianeila, a clairvoyant princess aboard the starship Argonaut, who comes across a child-like warrior called Age. Age is one of the Chosen Ones, and has the incredible power to transform into a giant creature called a Nodos, named Bellcross. Capable of destroying huge swaths of space, he must fight against the Bronze and Silver Tribes, and their own Nodos.

Released in 2007, Heroic Age stands tall despite being comprised of a single saga of twenty six episodes. Producer Xebec employed very high quality animation, comparable to larger, more popular studios like Sunrise Inc. or Toei Animation. The series also succeeds with its unique bit of dramatic flair and narration, treating the show like an actual opera or a historic record. Though technically not giant robots, the Nodos fulfill much the same roll while providing their own twist.

That's it for Anime April! We hope you check out some of the items we highlighted. As always, the St. Tammany Parish Library is happy to provide our catalog, opens a new window to search for anime and other topics of interest to our patrons. Happy watching everyone!