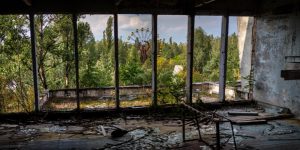 Early in the morning on April 26th, 1986, citizens of the worker city of Pripyat in the then USSR controlled Ukraine began waking up to face what they thought was just another day. Pripyat was the closest city that housed the majority of the worker population for the nearby Chernobyl power plant facility. The countdown for disaster began when plant personnel began safety testing the four nuclear reactors onsite.

All four nuclear reactors at Chernobyl operated on the Soviet exclusive RBMK model that relied on the use of a graphite core. Due to the Cold War and Iron Curtain blocking off the west, Soviet designers were not aware of the safety measures implemented by the west before and after the Three Mile Island nuclear power plant accident in Dauphin county, Pennsylvania seven years prior on March 28th, 1979. Due to the ongoing Cold War, technological advancements were always seen as a race between the polarizing ideologies of the east and the west. Because of this quest to be the best, the RBMK model favored sheer power and colossal size over efficiency and safety. It was these design flaws coupled with unqualified and improperly trained staff that ultimately caused the reactor No.4 explosion at Chernobyl.

The cause of the explosion began surprisingly with a safety test that was meant to test the reactors’ capabilities during low power situations. During the fourth failed attempt to successfully pass the test, the reactor power suddenly plummeted to almost 0%. Instead of heeding the warnings and protests from others on the test team, Anatoly Stepanovich Dyatlov, Deputy Chief Engineer in charge of operations at Chernobyl, forced the team to complete the test while the reactor remained in an unstable condition. Once the test was completed they attempted to shutdown the reactor to attempt to identify what had caused the problem during the test. This shut down of the already unstable reactor due partially to key flaws in the reactor design, caused a nuclear chain reaction. This sudden release of massive amounts of energy caused a steam explosion within the reactor.

The resulting explosion caused the top shield, “lovingly referred to as the “five kopek piece” by plant personnel due to its resemblance to the currency”, to rocket into the air and plummet back down onto what was once the reactor. This caused radioactive debris and dust to fly into the atmosphere and get caught up by wind currents that carried the radiation into the neighboring country of Belarus and even as far as England and Sweden.

The initial explosion instantly killed two of the plant’s operating staff. The majority of the initial fire team response would later die from the intense levels of radiation they absorbed while attempting to put out the graphite fire from the core. In total around 100 deaths can be attributed directly to the explosion but lasting long-term medical effects of the explosion are still being calculated today. 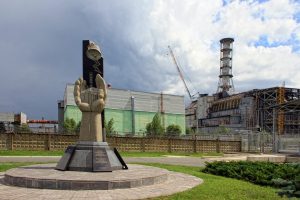 The initial containment unit was completed in Dec 1986, 8 months after the initial Chernobyl reactor 4 explosion. This shield was hastily constructed in order to prevent further radiation particles from escaping the damaged core. The 1986 structure was nicknamed the “sarcophagus” and was never meant to be a permanent solution; work quickly began on devising and building a permanent containment unit. 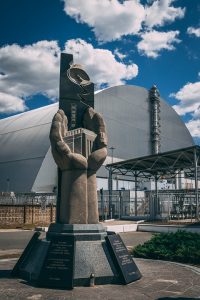 The movable and permanent New Safe Confinement (NSC) was completed in 2017. It is currently the world’s largest land based movable object as of 2017. After the successful placement of the NSC over the initial sarcophagus, work has begun on removing the initial containment unit. Over the series of multiple decades, the deconstruction team will eventually remove the core in its entirety, allowing the radiated area to eventually heal from the explosion.
Chernobyl was the biggest nuclear disaster until the Fukushima reactor failure in 2011 in Okuma, Japan following a simultaneous earthquake and tsunami. Both disasters are the only nuclear disasters rated as level 7 on the International Nuclear event scale to have occurred. Both disasters are harsh reminders of the immense destructive powers of nuclear energy.

Video that compares Chernobyl Reactor No.4 to Fukushima reactor in Japan.
https://youtu.be/fwtNvnWZjZY, opens a new window

Rare Footage of the Accident
https://youtu.be/Cc-vvhWXL9Q, opens a new window