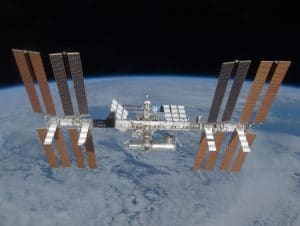 The International Space Station or ISS is the largest modular space station currently in low Earth orbit. Nations from around the world have come together to build this magnificent structure. NASA (USA), Roscosmos (Russia), the ESA (Europe), JAXA (Japan), and CSA (Canada) space agencies have collaborated to the building and maintenance of the station.

The first American module of the space station was launched on Dec. 4, 1998. This module, known as Unity, connected to the existing Russian-built Zarya control module that was placed in orbit shortly before on November 20, 1998. Since then, multiple modules and equipment have been added onto the station, with new additions to be added up to 2030. The station consists of 39 total modules with more to be added in the next 8 years. Including the large solar panel arrays, the stations is large enough to barely fit into a college football field.

The first manned crew of the station arrived on October 31st of 2000. The station has housed personnel from various nations for over 22 years since and continues to do so. As of April 2022, 251 astronauts, cosmonauts, and space tourists from 20 different nations have visited the station, with many making multiple return trips. According to the Nasa.gov website, the ISS has the living space equivalent of a five-bedroom house or two Boeing 747 jetliners and on earth would weigh the equivalent of almost one million pounds. This allows the traditional crew of six crewmembers of the station, plus visitors to move around with considerable ease.

The future remains uncertain for the ISS currently for various reasons. Officials in multiple countries have been pushing for privatization of the station after 2030 so companies can commercialize low-orbit space while federal space organizations such as NASA switch their focus to deep-space exploration. Issues arising from the Russia-Ukraine conflict of 2022, and the international sanctions Russia has received because of it, also play a part in the uncertain future of the station.

Live blog updates, live videos of earth, and a counter for “station time in orbit” can be found on NASA’s official ISS page. The link to this page is provided below:
https://www.nasa.gov/mission_pages/station/main/index.html