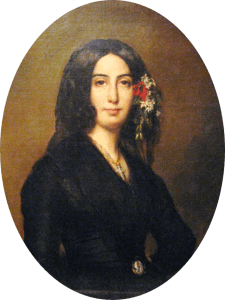 Born Amantine Lucile Aurore Dupin in Paris France, she is best known by her pen name, George Sand, opens a new window. She is known as one of, if not the best, writers during the European Romantic era. She was born July 1, 1804 and raised predominantly by her grandmother, Marie-Aurore de Saxe, who lived in the small French village of Nohant. After her grandmother passed, Sand would come to inherit the Nohant, opens a new window estate.

George began her first literary pursuits with numerous collaborations with established writer, Jules Sandeau. Shortly after the collaboration, she would debut her first independently written novel, Indiana (1832), to rave reviews. Indiana was also the debut of her iconic pen name George Sand. Shortly after, she became the most popular author in England, and her book sales surpassed contemporary literary masters such as Victor Hugo and Honore de Balzac.

Besides her own accomplishments, George sand was also historically known as a caretaker and muse for the chronically ill composer, Frederic Chopin, opens a new window. While she was not present at his deathbed, George’s daughter, Solange, and her husband were present.

Sand was also one of many women of the time who chose to wear male attire in public rather than the sometimes-burdensome female fashion of the time. This was at a time that it was considered illegal for women to wear men’s clothing without the proper permits, opens a new window. While many within her circle embraced her rebellious personality and public persona, there were many still who considered her crude and chaotic.

Sand passed away peacefully on June 8, 1876 at the age of 71 at her Nohant estate. She was buried in a private family graveyard located behind the local chapel.

Please Note: In order to bring you new and interesting titles, Hoopla content is updated monthly, and these titles may not be available in the future. To find the latest titles, please visit www.hoopladigital.com.