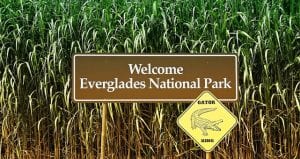 An hour away from the hustle and bustle of Miami you will find yourself in what feels like a different world entirely compared to the city. The Everglades National Park is the third largest national park in the country, covering 1.5 million preserved acres of tropical and subtropical habitats with one of the world's most diverse ecosystems. Currently, the National Park Service officially recognizes nine distinct, yet interdependent, ecosystems within the park. The park is one of the few national parks created to protect a fragile ecosystem rather than a unique geographic feature.

Preservation attempts of the swamplands began in the late 19th century after several attempts to drain and develop the land for agricultural and residential purposes in the 1880’s. The Everglades were established in 1934, though it was dedicated as a national park by President Harry Truman on Dec 6th, 1947.

The park is an important yet fragile ecosystem that is a significant breeding ground for wading birds in North America. The park also is home to along with thirty-six threatened or protected species such as the Florida Panther, The American crocodile and the West Indian Manatee. 350 species of birds, 300 species of fresh and saltwater fish, 40 mammals and 50 reptiles make of the vibrant ecosystem of the Everglades. The American crocodile’s only remaining habitat within the continent is in south Florida, where they cohabitate with the freshwater alligators in the swamplands. As of 2007, the American crocodile is no longer on the endangered list, but currently remains on the threatened wildlife list.

One of the most common ecosystems within the park are known as freshwater sloughs which are home to the famous alligators of the Everglades along with other animals such as brown pelicans, herons, egrets, deadly water moccasins, and eastern diamondback rattlesnakes. The tall broad-leafed marsh plants within this ecosystem also gave the everglades it’s nickname “river of grass”, a title given to the park by famous conservationist, Marjory Stoneman Douglas. Her book, The Everglades: River of grass was published in 1947, the same year the park was officially dedicated and open to the public. Her book played a major role in changing the public perception that the Everglades were a national treasure rather than worthless swampland.

The everglades, while perhaps not as glamorous as other national parks, remains one of the most diverse and well-preserved examples of North American marshland wildlife. The park is open to the public for a small fee with guided tours and camping sites available as well. 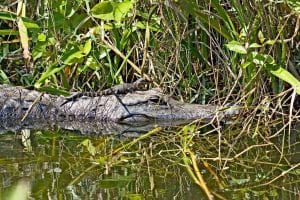