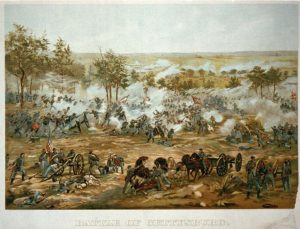 The Battle of Gettysburg was considered the turning point of the Civil War for the Union side. The battle in the small Pennsylvania town took place in the farm lands of the town and even the city proper.

The battle ended in favor of the Union on the 3rd day after the confederate army’s last attempt at victory, known to history as “Pickett’s Charge”, failed to permanently break the union line.
Battle of Gettysburg was given the title as one of the bloodiest fights during the Civil War, holding the title of most casualties throughout the entire war. During those 3 long, harrowing days, the Union army suffered 23,049 casualties while the Confederate army suffered 28,063 casualties. Thousands upon thousands more on both sides were seriously injured and required amputation.

On November 19, 1863, months after the battle took place, Lincoln gave his historical “Gettysburg Address” at a dedication ceremony for a soldier’s national cemetery. Lincoln’s speech reinvigorated the resolve of a country torn in two to reunite under the constitution that their legacy was built upon.