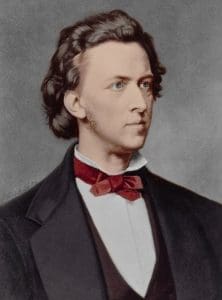 Frederic Francois Chopin was born in the Duchy of Warsaw, now modern-day Poland. He showed promise as a musician from a very early age. By his 20s he completed his musical education and early compositions. At this time, he and his family fled Poland right before the failed uprising of November 1830 in Warsaw.

Chopin is most famous for his waltzes, nocturnes, preludes, and concertos. Some of his most famous songs include Nocturne in E flat, op.9, No.2, Piano Sonata No.2 in B flat minor, Op.35, and Mazurkas, Op.24. Chopin was responsible for re-inventing piano playing at the time, creating new spins on established song stylings while also creating new ones such as the instrumental ballade. Most of these musical innovations were written and performed on pianos by Pleyel, Chopin’s favorite Piano manufacturer.
Chopin is honored today with the International Chopin Piano competition held every five years in Warsaw, Poland. The Fryderyk Chopin Museum is also located in Warsaw and is housed in the historic Ostrogski Palace. While visiting you can see Chopin’s last Pleyel piano, along with his death mask and other items of significance to his illustrious life.

Chopin’s life and accomplishments have inspired multiple modern takes and tributes to the famous pianist/composer as well. Multiple movies have been made depicting the young man’s life, such as Impromptu (1991) starring Hugh Grant, and A Song to Remember (1945) starring Cornel Wilde. A highly fictionized version of Chopin also appeared in a Japanese Roleplaying game, Eternal Sonata (2007) developed by Tri-Crescendo and published by Bandai-Namco. 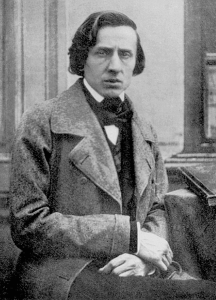 A link to the museum’s website
https://muzeum.nifc.pl/en, opens a new window