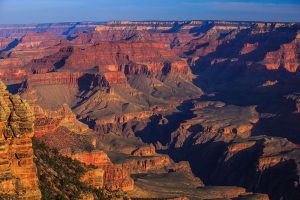 The Grand Canyon National Park, opens a new window, located in northwest Arizona and run through by the Colorado River, was officially made a national park on February 26, 1919.  The canyon, opens a new window is 277 miles long, is 1 mile deep, and it's width varies between less than 1 mile to 18 miles depending on the location.  The park covers over 1 million acres.

The park was named a UNESCO World Heritage Site, opens a new window in 1979 because it is one of the Earth's greatest on-going geological spectacles.

If you would like to learn more, here are some of the books the library has to offer!

Celebrate the 100th Anniversary of the Grand Canyon National Park