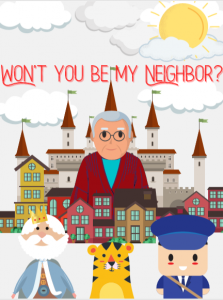 Our favorite neighbor, Mr. Rogers, was born this month on March 20, 1928 as Fred McFeely Rogers in Latrobe, Pennsylvania.

Mr. Rogers was known for nurturing creativity, self-esteem, curiosity, and self-discipline in his audience that was comprised of children and their parents. His show, Mr. Rogers’ Neighborhood, aired 895 episodes on PBS from 1968 to 2001.

Mr. Rogers never talked down to his child audience and did not shy away from discussing difficult topics such as divorce, bullying, and even racial issues. He discussed these difficult topics in a calm and kind tone, and treated his young audience more as equals. Mr. Rogers also talked with his preschool audience, and held a conversation with them unlike many children’s shows back then and even still today that opted to talk at their young audience.

Though Mr. Roger’s Neighborhood has been off the air for 20 years, reruns of episodes still appear on public broadcasting channels across the country. Our favorite neighbor still holds a place in the hearts of multiple generations and his morals and teachings will continue to shape our lives.