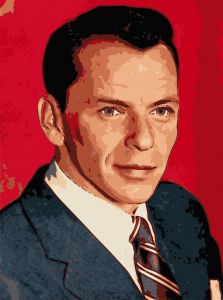 Frank Sinatra, opens a new window, born Francis Albert Sinatra, was born on December 12, 1915 in Hoboken, New Jersey to Martin and Natalie Sinatra, Italian immigrants.  He started his career by singing in nightclubs, then became a band singer for Harry James, opens a new window and then for Tommy Dorsey, opens a new window.  In 1943, Sinatra began his solo career and his acting debut.  In the 1960s, Sinatra became a founding member of the "Rat Pack, opens a new window" with Joey Bishop, Dean Martin, Sammy Davis Jr., and Peter Lawford.  They filmed several movies together, including Ocean's Eleven in 1960.  Throughout his life, he acted in many films and put out several albums.

Want to learn more about Franck Sinatra, watch his movies, or listen to his music?  Take a look at the following list to see what the library has to offer.