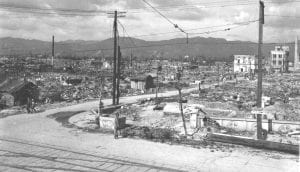 On the morning of August 6th, 1945, the citizens of Hiroshima, Japan had just begun going about their day. Overhead the American bomber, the Enola Gay, was flying at a low altitude over the city center. Air raid sirens had gone off to warn citizens to evacuate a couple of hours prior, but Japanese officials assumed the Enola Gay was just another scouting plane and did not raise the alarms. At exactly 8:15 AM the Enola Gay released the atomic bomb nicknamed “Little Boy”. In an instant everything within a 1-mile radius of the light was destroyed, killing thousands instantly as the equivalent of 15,000 tons of TNT exploded over the city. After the destruction, the Japanese were scrambling trying to understand what their civilian city had just been hit with. There had been rumors of a secret weapon, but no one expected just how destructive this new weapon would be. Around 70,000 people were estimated to have been instantly killed from the initial blast with casualties caused by damages and radiation reaching well into the 100,000-death mark over the span of 5 years. While there is no definite proof, most experts agree that a dozen or so of American citizens, including American POWs were killed in the initial blast.

There is still debate today among historians whether dropping atomic bombs on Hiroshima and Nagasaki were the right course of action for Allied forces to take. President Harry Truman made the difficult decision to drop the bomb after succeeding Franklin Delano Roosevelt after his death during his unprecedented third presidential term. Some historians have suggested he did so only to gain post-war control over the Pacific before the Russians could fully enter the Pacific side of World War II.

There was also fear of high casualty rates on both sides if a full-scale land invasion of the main islands of Honshu and Hokkaido were to occur. American forces had already suffered heavy losses winning over the islands in the Pacific and Okinawa, one of the many southern islands that were a part of central Japan. While American forces had already laid out an invasion plan for mainland Japan titled Operation Downfall, the severe cost of life and the Japanese government’s promise to fight till the last woman and child made military leaders hesitant to go down this path to end the war. Operation Downfall consisted of the two separate operations. Operation Olympic was the invasion of the mainland island of Kyushu, and Operation Coronet was the invasion of Tokyo on the mainland island of Honshu. Military advisors and experts agreed at the time that the only way allied forces could win the war without sacrificing hundreds of thousands of lives was to shock and awe Japanese officials into compliance with a destructive power never before witnessed.

While America has not apologized for dropping the bombs on Hiroshima and Nagasaki, many strive to never have to use such a destructive power on a civilian population ever again. Many memorials for the victims of the atomic bomb can be seen by visitors to Hiroshima today at the epicenter of the bomb drop location. One of the more famous sites is the Hiroshima Peace Memorial that was originally the Hiroshima Prefectural Industrial Promotion Hall. After the bomb fell, only the dome of the building survived leaving it to be called the Genbaku Dome or A-bomb Dome. The Genbaku dome was designated a UNESCO World Heritage site in 1996. The city has been successfully reconstructed for decades now but scars of the bomb can still be seen as reminders of the terrible power unleashed on its people so many years ago.

Atomic Bomb Wipes Out Hiroshima In A Matter Of Seconds | Greatest Events of World War 2 In Colour - YouTube, opens a new window

The bombing of Hiroshima