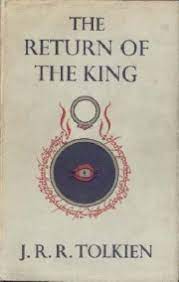 J.R.R. Tolkien always conceived that The Lord of the Rings would be one story, but, by the time he had written much of the work and prepared it for publishing, the author knew that his story existed in a much wider world. More so than any of the books as yet released, The Return of the King was the realization of that new world and a fitting finale to his exciting adventure.

The book picks up with our various heroes still divided. Aragorn and company are fresh from victory in Rohan having defeated the traitorous Saruman and his army of Uruk-hai before Gandalf was forced to flee with Pippin to assist Gondor in their coming war. Meanwhile, Sam is in Mordor and must find a way to save his master and continue the journey to destroy the Ring once and for all.

Tolkien divided his adventure into two 'books': "The War of the Ring" and "The End of the Third Age". The first book mainly concerns the continued adventures of the Fellowship as they race to Gondor to protect the city of Minas Tirith and confront Sauron's armies in an attempt to distract him. The second book covers the remnant of Frodo and Sam's trip to Mordor before reuniting with the survivors of the war and wrapping up the various loose ends.

The rest of the book is dedicated to what Tolkien calls the Indexes which are composed of various relevant information and history about Middle Earth and the backstory. Included in these indexes is background on the various kings of Gondor, hobbits, the histories of the elves and dwarves, and more. Though alluded to through the books, this was the first time Tolkien actually compiled all of the info together, and Tolkien remains one of the earliest authors to purposely world-build a fictional series. Writers and historians readily recognize the world-building efforts in many early narrative stories, even by the editors of various religious texts, but Tolkien was among the first to actively pursue such a goal. Tolkien, of course, was inspired by the Irish author and poet Lord Edward Dunsany.

The Return of the King was released in 1955 to tremendous praise and capped off Tolkien's The Lord of The Rings. The three books are widely heralded among the pre-eminent book series of the 20th century, and Tolkien as the 'father of modern fantasy'. 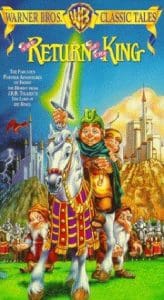 The first attempt at a film covering the events of The Return of the King released 25 years later in 1980. As illustrated in earlier blogs, opens a new window, Ralph Bakshi produced a film of The Lord of the Rings, but it only covered the events of the first two books. Originally, Ralph Bakshi and United Artists intended to film three movies which later got cut down to two. Meanwhile, Rankin/Bass, who originally produced The Hobbit in 1977, planned on a sequel. Titled Frodo, The Hobbit II in pre-production, Rankin/Bass eventually settled on using the name of the final book and choosing to summarize the events of the previous film and books. Dubiously, Rankin/Bass lacked the license for The Return of The King's book, and Ralph Bakshi attempted to have the Rankin/Bass film canceled. In the end, the Tolkien estate and Rankin/Bass settled, and The Return of the King was released in 1980. The films of both companies eventually were acquired by Warner Bros. who owns the rights to this day. Curiously, The Return of the King is not available via streaming on any service. 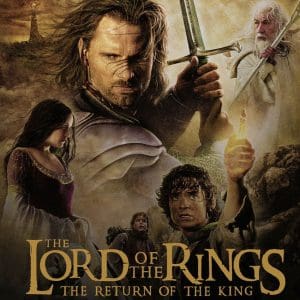 Peter Jackson's live-action Lord of the Rings series was broadly filmed back-to-back over a course of two years from 1999 to late 2000 with most of the filming for Return of the King being in 2000. Once filmed, Jackson and New Line Cinema entered post-production, completed pick-up shots, and released the films in order. Naturally, much of the additional work for the final movie was put off until 2003 which was shortly before the release of the movie. Production was so tight, in fact, that Jackson himself never saw the final cut of the film until the premiere.

Though all three films enjoyed nominations and victories for numerous accolades, The Return of the King swept the Academy Awards; the film was nominated and won in eleven categories:

According to IMDB.com, The Return of the King won 209 awards across 96 events over the last twenty years.

The Lord of the Rings, opens a new window

Stay tuned next year when we cover The Silmarillion.