“K&B purple” is a phrase that can still be heard in Louisiana today when describing that very specific shade of purple. Even though K&B was bought out by Rite-Aid in 1997, the store and its unique style is still alive and well in Louisiana culture. 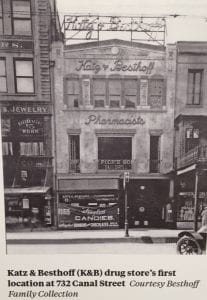 There are many stories on how the “K&B Purple” color came to be, though it was believed to have originated sometime around the first half of the 20th century. Some stories say the color was the work of Besthoff’s wife who bought the purple paper on clearance to save on costs. Others say it was bought from a vendor at a steep discount because the original buyer did not like the color. Regardless of which story is true, “K&B Purple” became an instant hit. The phrase “if it’s purple on the outside, its only the BEST from Katz and BESThoff on the inside” came to describe the superior quality of products available at K&B stores.

When Rite-Aid bought out the K&B franchise in 1997, the devotion to the color and brand of K&B was so great that many vowed never to shop at Rite-aid again. The outrage over the change was so strong that Rite-aid stopped the process of changing signs and slogans to Rite-aid for several months at certain former K&B stores. Even though K&B purple and other distinct signage have been gone for decades, the colorful memory of the friendly, local pharmacy lives on in the culture and minds of the Louisiana people. 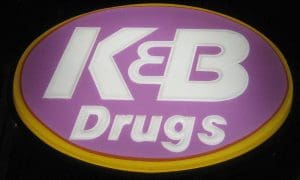