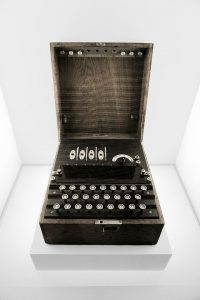 The Enigma machine was the secret weapon of Germany in World War I and Nazi Germany in World War II. The machine was a simple large wooden box that contained a complicated rotor-based cipher machine. These machines were invented by German engineer Arthur Scherbius near the end of World War I and allowed Nazi Germany to send encrypted, often believed to be unbreakable, messages in order to keep Allied forces in the shadow. Adolf Hitler and members of the Nazi high command used a similar, more complicated form of the Enigma machine called the Lorenz machine.

British Cryptologists led by Alan Turing were tasked with breaking the Enigma encryption code at Bletchley Park in Buckinghamshire. Their team was part of the British Government Code and Cypher School (GC&CS) and had taken residence at Bletchley Park. 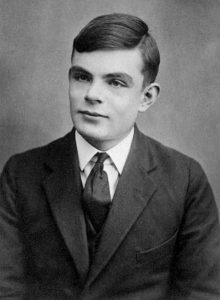 The Bombe Machine was invented in 1939 by Turing himself along with the rest of his codebreaking team. This machine allowed British Allied forces to decode multiple encrypted Nazi messages daily. The hard work of Turing and the men and women working at GC&CS in Bletchley Park is arguably responsible for the timely Allied victory on the western front of the war.

Obtaining the machine and cracking the Enigma code was directly linked to the Allied victory on the European front. Historians claim the work done at Bletchley Park by Turing and his team shortened the war by several years and saved millions of lives. Some historians even argue that if it wasn’t for the tireless work of the men and women of Bletchley Park the Allied forces could have possibly lost the war.

Alan Turing and the Enigma Machine