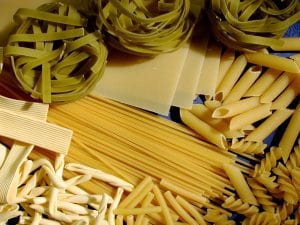 Noodles have been a staple portion of dishes in multiple cultures around the world for almost 4,000 years. This dish is often made from unleavened dough which is rolled flat and cut into long thin strings. Certain vegetables such as zucchini and sweet potato can also be made into delicious noodle dishes.

Noodles are usually prepared in boiling water, with cooking oil or salt often added. Pan-fried and deep-fried noodles are also a common practice when preparing the dish.

While the dish is primarily associated with Italian, Filipino, and Asian culture cuisine, its origins are still highly debated amongst historians. The oldest evidence of a noodle dish was found in the Qinghai province of China and radiometric dating confirmed the dish was prepared over 4,000 years ago. While this historical evidence would assume noodles originated in China thousands of years ago, multiple cultures still highly contest this find as concrete evidence that noodles were first prepared in China.

Batchoy
A Filipino noodle soup traditionally made from pork organs such as liver, kidneys and heart, though pork meat is more commonly used today.

Bun Cha
A Vietnamese noodle dish that is paired with grilled pork.

Chow Mein
Translates to “stir-fried noodles.” This famous dish originated in northern China and can be prepared crispy or soft.

Farfel
A pellete-shaped pasta made with egg noodle dough. Farfel is most commonly served as a Jewish Sabbath dinner and prepared with simple seasonings or none at all. Farfel can also sometimes be found pre-made in US grocery stores under the name of egg barley.

Japchae
Japchae roughly translates to vegetable mix and is a traditional Korean dish with alleged royal origins in the 17th century.

Jjangmyeon
Jjajangmyeon means “fried sauce noodles” and originated from China’s Shandong region. The noodles are topped with a thick black bean paste sauce known as Chunjang. Diced pork and vegetables are often added to the dish as well.

Kalguksu
A Korean noodle dish that means “knife noodles.” The dish often consists of kelp or chicken broth with noodles and vegetables added in.

Pho
One of the most popular Vietnamese noodles dishes in the United States. Pronounced “fuh” it was popularized in the 1970’s from Vietnamese immigrants and soldiers returning from the Vietnam War.

Ramen
A quick, easy and satisfying noodle dish popularized worldwide by Nissin Cup Noodles in 1971. While Ramen was originally a Chinese dish, the Japanese spin on the traditional noodle dish raised its popularity to a global scale. The dish consists of quick noodles served in broth with meat and vegetables.

Bun Bo Hue
This dish is a spicy beef noodle soup that originated in the royal city of Hue in Vietnam. The dish often consists of pig’s feet, fermented shrimp paste and lemongrass.

Chicken Noodle Soup
A traditional American comfort food popularized by the Campbell Soup Company in 1934. This dish is often used to treat symptoms of the common cold.

Pad Thai
One of Thailand’s most famous dishes. The noodles are often fried with shrimp, tofu, egg, vegetables and seasonings.

Soba Noodle
Soba noodles are a Japanese dish often made from buckwheat flour. Soba Noodles are well known for being made with a wide variety of ingredients such as green tea powder, seaweed and yam flour.