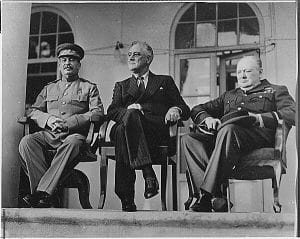 The historical meeting of the “Big Three” at the Persian capitol of Tehran (The capitol of Iran in present-day) on Nov. 28th 1943 essentially signed the death warrant for Nazi Germany and the Axis Powers. The conference also revealed early telling signals of the Cold war between the U.S. and Soviet Union that would follow after Allied Victory in 1945. This meeting also laid the groundwork for plans that would be ratified at the post-victory Potsdam conference of 1945.

The initial talks about Operation Overlord were discussed at the Moscow conference the October before the Big Three’s meeting in Tehran. Before Tehran, Stalin had been advocating opening a 2nd front on the War against Nazi Germany as far back as 1941. Because of this, Stalin was quite pleased with the decision for the U.S. and British forces to open a western front in the battle against Nazi Germany that was officially decided at the Tehran conference. With Operation Overlord set in motion this would ultimately lead to D-day and storming the beaches of Normandy on June 6, 1944. For Nazi Germany, the storming of the beaches of Normandy would be the beginning of the end of the war for all Axis Powers. After a 2nd front was opened on the European front, Stalin was easier to convince to join the war in the pacific once Nazi Germany had been taken care of.

Foreshadowing of the Cold War between the U.S. and Soviet Union

While relations between the United States and the Soviet Union were nothing short of amicable during the Tehran Conference, there were hints that the two nations ideological differences and views of a global future would eventually come to a head. Stalin was intent on bringing most of eastern Europe under Soviet rule, stating claims that they were originally part of Russia. While Churchill and Roosevelt disagreed with this, a decision was made at the Tehran conference that talks of Russian expansion would be discussed after an Allied victory. While soviet relations remained healthy until the end of the war, telling signs of discomfort and distrust between the allied nations were beginning to show.