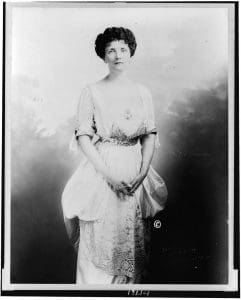 The name of Emily Price is often synonymous with etiquette.

Emily Price Post was born into wealth as the only child of famous architect Bruce Price. As a child of the upper class, she was raised on the importance of etiquette and the precise social rituals of the wealthy elite. In 1892 she married successful businessman and investor, Edwin M. Post. During this marriage she gave birth to two sons, Edwin M. Jr and Bruce Price Post. Unfortunately, in 1905 the marriage ended in divorce due to the unfaithfulness and public scandal that Edwin Post brought to the marriage.

Instead of remarrying as was the traditional norm for a woman of her status in the early 1900’s, Emily Post began earning an income for her children as a freelance writer. She saw varying levels of success with writing, writing column pieces and even novels such as Flight of the Moth. Her breakthrough success, however, happened when Richard Duffy, an editor at Funk and Wagnalls, suggested she write a guide to American etiquette. From this suggestion her 1922 novel Etiquette in Society, In Business, In Politics, and at Home was written and published. This book skyrocketed her popularity and Emily Post became a household name practically overnight. Etiquette is currently on its 19th edition, written and published by her great and great-great grandchildren.

While Emily Post passed away in 1960, her etiquette empire still remains strong thanks in part to her grandchildren who have inherited her role as experts of American etiquette. Short biographies can be found on the Emily Post Institute website for all prominent members of the post family from Bruce Price to present day.

A link to their company’s website can be found below:

Please Note: In order to bring you new and interesting titles, Hoopla content is updated monthly, and this title may not be available in the future. To find the latest titles, please visit Hoopla, opens a new window.