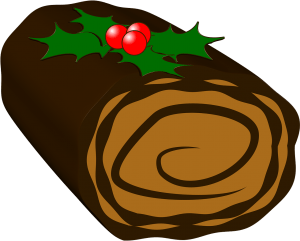 Similar to a Swiss roll, the Yule log cake is made of a soft sponge cake and is believed to have originated in France around the 19th century and was known as Bûche de Noël. The cake is shaped, decorated and frosted to resemble the Yule log from the original tradition.
The cake usually consists of yellow sponge cake with chocolate buttercream in a spiral fashion, though many variants of the traditional recipe are used today. The frosting is often scraped to give it a bark-like texture to resemble the traditional Yule practice. While the edible treat originated in France, it quickly spread to other nations as the burning of the Yule log tradition began to lose  public interest.

Both Traditions in Modern Day

Today, both Yule log traditions are still held, and families take part in either one or both traditions during the holidays. For families without a fireplace, modern technology has provided alternatives. The burning of the Yule log has been replaced in most homes by a TV broadcast or digital recording of a Yule log burning in a holiday themed fireplace. This modern tradition began in 1966 when the New York City television station, WPIX, aired a multiple hour long television showed titled "The Yule Log." This show was simply a recorded film loop of a Yule log burning in a fireplace while Christmas music played softly in the background. 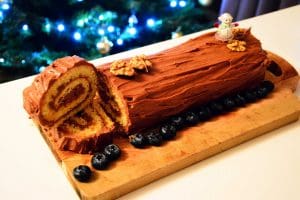