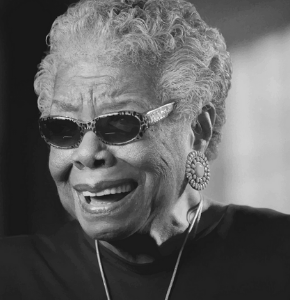 Maya Angelou was born on April 4, 1928. She passed away in 2014 and left a void in the literary world and in the hearts of those she touched with her words and advocacy. Though she was  a prolific writer of poetry, she has also published seven autobiographies as well as writing several plays, television shows and even cookbooks. She also danced professionally, sang and performed her own compositions both on Broadway and on a calypso album she released early in her career. She both performed in and wrote several plays. Angelou also had a very successful acting career and has lived a brave life filled with turmoil, devastation, redemption and survival. She worked closely with Martin Luther King, Jr. during the Civil Rights Movement.

Maya Angelou, the People's Poet, we will never forget how you made us feel through your extensive and varied works. Truly, a phenomenal woman! Be sure to explore this amazing life through her works at the St.Tammany Parish Library.

I Know Why the Caged Bird Sings

Even the Stars Look Lonesome

The Collected Autobiographies of Maya Angelou

Rainbow in the Cloud

I Shall Not Be Moved