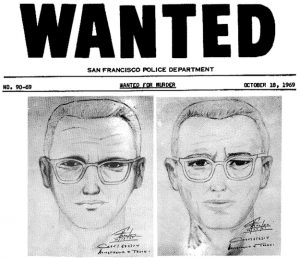 This year marks the 50th anniversary of the first confirmed Zodiac killings.  On December 20, 1968, David Arthur Faraday, 17, and Betty Lou Jensen, 16 were shot and killed on Lake Herman Road, within the city limits of Benicia. The two were on their first date and had planned to attend a Christmas concert at Hogan High School.  Instead, they visited a friend before having dinner at a local restaurant.  Later, they parked at a well-known lovers' lane, where they would fall victim to the Zodiac Killer.  He would go on to kill at least seven known victims, though experts disagree on the possibility of other victims.  As horrific as the Zodiac killings were for their focus on young lovers, this serial killer is primarily famous for two reasons: his taunting letters in 1969 which dared police and the public to decipher his secret code, and for the fact that his identity has never been discovered.  Theories abound as to who the Zodiac was, but, 50 years later, we still lack definitive answers.

To learn more about the Zodiac, we've identified some podcasts who have devoted episodes (and, in one case, an entire season) to the Zodiac and his victims:

Maybe you've never heard of the term before...or maybe you're curious after hearing about breakout shows like Serial.  Either way, if you're a fan of true crime, you might enjoy podcasts.  A podcast is a series of digital episodes that you can listen to, usually for free.  Think of the old time radio programs like The Shadow or Flash Gordon, except on demand.   If you would like to learn more about podcasts and how to listen to them, ask our reference librarians for help!  Also, we have this handout that can help you get started!!  Podcast_Handout