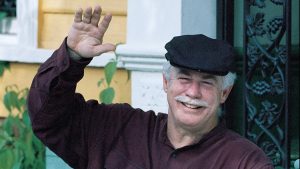 A trinity of New Orleans legends have passed on in 2019 with Ronnie Virgets leading the helm, Leah Chase following close behind and ending with the Nite Tripper, Dr. John. All shuffling off this mortal coil this year, each leaving behind a special and amazing legacy.

Ronnie Virgets was a storyteller who passed away on May 20, 2019. He was dubbed the "Voice of New Orleans," he used to have a show on WGNO late at night called Real New Orleans. He had an unmistakable New Orleans accent and manner of speaking that really brought to life the vignets he was speaking about, happenings around the area and things about our culture that might be foreign to people outside the area. I used to watch his show as a kid and I subsequently and possibly subconsciously picked up a column at the same newspaper he began his career with, The Times Picayune. He wrote sports features for the Times Picayune and went on to write for many publications in the area and have spots on some of the local news stations including Gambit Weekly, New Orleans Magazine and spent several years as WWL's Feature Reporter and then went on to WDSU to take over the same position. He even reigned as King of Krewe De Vieux at the Mardi Gras in New Orleans in 1996.

It was comforting to see that the St. Tammany Parish Library has Ronnie Virgets resources, you can also look up Real New Orleans on YouTube.com if you find yourself escaping down the Ronnie Virgets/New Orleans wormhole.