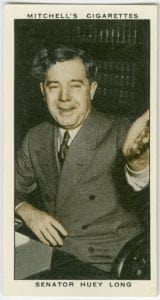 Known as the Kingfish both to those who feared and adored him, Huey P. Long was one of the most fantastical political figures in Louisiana history. He was loved and revered by the poor and despised by the rich and social elite. This often-polarizing man held the populist stance of “Every man a king”.

Born on August 30th, 1893 in Northern Winn Parish. While Huey was born into one of the most impoverished parishes in the state at the time, his family was relatively well off compared to the destitute majority in the parish.

He was a combative boy from a young age, often questioning or disobeying teachers when he disagreed with their rules. Even as a young man, he had his sights set on politics after passing the Louisiana bar exam with no high school diploma and after attending only one year of law school.

As governor he reinvigorated the poor and established vast welfare programs to pull the majority of Louisianans from abject poverty. While governor, his programs increased literacy rates in adults and children and provided free school books to all schools in the state. He also oversaw construction of a new state capitol building which is still in use today. The current Louisiana state capitol building built under long’s administration still holds the record for tallest state capitol building in the United States. 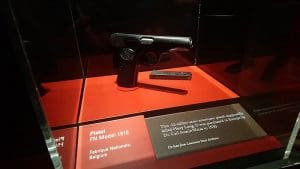 After ending his term as governor and beating the incumbent, Joseph E. Ransdell, for a Louisiana senate seat in the 1930 election, Long set his sights on the presidency of the United States. However, on Sept 8th, 1935, Huey P. Long was shot on the first floor inside of the Louisiana state capitol building by Dr. Carl Weiss. He was rushed to Our Lady of the Lake Hospital where he died from internal bleeding on the morning of September 10th. Dr. Weiss was the son in law of one of Long’s biggest enemies in the state, Judge Benjamin Pavy of Evangeline and St. Landry parishes. Long had just successfully gerrymandered Judge Pavy, ruining his chances in the upcoming elections. It is the widely held belief that Dr. Weiss shot Long in retaliation for the wrongs done to his father-in-law. Years later, evidence was found that supported the theory that Weiss only hit Long in the jaw and that a stray bullet from Long's bodyguard's retaliating ricocheted off the the wall and struck Long by accident. While there is evidence to support this theory, it is still highly contested by most historians and currently believed to be a false narrative. After his untimely death, Long was laid to rest on the grounds of the new state capitol where his body remains to this day. His gravesite is marked by a large statue of himself looking up in awe at the new state capitol building which he built. 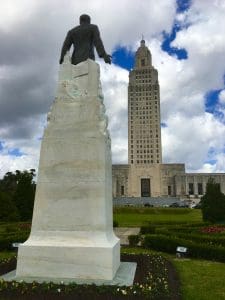 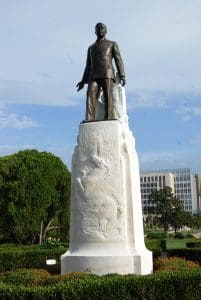 Out of his death a Long political dynasty was formed. His wife, Rose Long, replaced him in the senate after his death. His brother Earl Long was elected Lieutenant-governor in 1936 and governor in 1948 and 1956. His son, Russell Long, was a very powerful U.S. senator from 1948 to 1987 who played a large role in shaping the nation's current tax laws.

For better or worse, the Kingfisher left an indelible mark on the state of Louisiana. Most of Louisiana’s infrastructure today can be traced back to projects originally established during Huey P. Long’s stint as governor. While others saw him as a savior and paragon of the poor, others saw him as a dictator and crook. Love him or hate him, Huey P. Long is an almost mythical figure in Louisiana history whose actions almost 100 years ago still have lasting effects today.