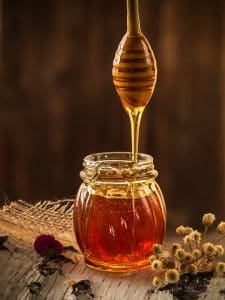 Honey has played a role in human culture and cuisine since ancient times. This sweet substance is produced from worker bees from the secretions or floral nectar of plants. Honey has amazing preservation potential with the capability of remaining edible for hundreds of years if properly preserved.

Honey is also widely known for its natural antioxidant, antimicrobial, and anti-inflammatory properties. It is often used to treat throat infections, fatigue, or dizziness though it should be stated there is currently no authentic scientific backing to prove it does anything to help cure these symptoms.

If you would like to learn more about honey, visit the library's A-to-Z Food America Database, opens a new window. Interested in trying a recipe? Try one of the ones below:

Recipes:
Marzipan, opens a new window: A sweet paste made with sugar or honey and almond meal. It is often mixed in with other desserts for added flavor.
Recipes | AtoZ Food America

Yakgwa, opens a new window: A traditional Korean pastry made with honey, sesame oil, and a distilled rice liquor called Soju. The pastries are fried then soaked in rich syrup, honey, and ginger. Yakgwa is “medicine” in Korean. Honey was once considered to have healing properties in Korean culture.
Recipes | AtoZ Food America

Records of beekeeping date back as far as 9,000 years ago in North Africa. In Egypt, Bees, honey, and beeswax played a pivotal role in shaping Egyptian culture at the time. Bees were kept domestically by Egyptians primarily for the beeswax rather than the honey. Beekeeping records have also been found as far back as 1100 B.C.E in China and 200 B.C.E in ancient Rome and Greece.

Why bees are essential
Due to global warming and aggressive commercial farming practices, the global bee population has been on a steady decline since 2010. Bees play a crucial role in pollination which increases the production yield over 75% of crops. Without bees to help pollinate, the global food supply would suffer greatly.