The Lord of The Rings: The Two Towers 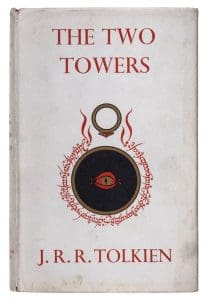 Welcome to year four of Tolkien Week! Tolkien Week is an entire week dedicated to the life and works of J. R. R. Tolkien, the father of modern fantasy. After a crazy 2020, we are back to our regular scheduling, hopefully.

Optional Thematic Music To Listen To While Reading, opens a new window

Two years previous, we covered The Fellowship of the Ring, the first third of Tolkien's epic The Lord of the Rings. Tolkien's three-volume masterpiece continued to suffer from post-war paper shortages in the 1950s, so his books entered publishing cut in half. The Two Towers suffered a similar fate, being divided into The Treason of Isengard and The Ring Goes East. Thankfully, no further divisions were necessary, and The Two Towers was almost always sold intact, as with the other books.

The story picks up immediately after the end of Fellowship of the Ring. Frodo Baggins is determined to complete the journey to Mordor, having realized the peril his friends exist in, thanks to the ring. Joined only by the loyal Samwise Gamgee, the two hobbits trek alone to the forbidding realm, dogged by the treacherous Gollum, who still craves the ring, after being separated from it for eighty years.

Meanwhile, the remainder of the Fellowship is in shambles. After a fierce battle with orcs, Merry and Pippin have been captured and whisked away, and Boromir of Gondor lies slain in battle. Aragon the Ranger, Legolas the Elf, and Gimli the Dwarf are tasked with rescuing the captured hobbits, trusting the completion of the journey to Frodo and Sam.

Without spoiling anything, The Two Towers became the quintessential sequel novel, building off the first segment while rising to an eventual cliffhanger, in this case two! And yet, like many sequels that did not finish the story, The Two Towers also became the poster-child for 'less popular' interludes within a series. Take a random poll of people who have read all three of the books, and a minority will list The Two Towers as their favorite. This is a common trend in book and movie series, notably bucked by The Empire Strikes Back, but that's another discussion altogether. Regardless, accolades in 1954 typically praised the more coherent stories with more emphasis on the present problems, as opposed to the impressive amounts of backstory found in The Fellowship of the Ring.

In the mid-1970s, several studios attempted to bring Tolkien's works to film. The Two Towers is the notable exception to this effort. Following the relative success of Rankin-Bass's The Hobbit, Ralph Bakshi set out to produce a film covering the larger work. Despite impressive special effects, the movie suffered from production issues and plans to make a trilogy of films died before the first film even finished. The work that had been completed on what might've been The Two Towers instead wound up combined with the first film. Significant editing ensued and audiences inevitably viewed The Lord of The Rings, a film spanning two books and ending on a promise that was never fulfilled.... by Ralph Bakshi, at least.

And yet hope would remain while the fellowship of dedicated fans endured. As the 70s progressed into the 1980s and eventually 1990s, a new generation of film-makers rose to the front, including Peter Jackson, Wingnut Films, and Weta Digital. As detailed in our previous blog on The Fellowship of the Ring, the entire series was filmed concurrently in the later part of the decade. The Lord of the Rings: The Two Towers was to hit theaters on 2002, a year after the first film released. 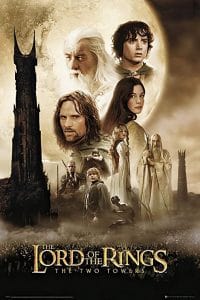 The Two Towers departed from the novel in notable ways. Arwen, played by Liv Tyler, became a significant character, despite existing as little more than a love interest and prize in the books. Aragorn experiences additional tension after being presumed dead during a warg raid, an event shown in the first book, but not shown until the second movie. Shelob the Spider became a no-show, pushed back to the third movie; in her place, David Wenham fills in as the wistful Captain Faramir, determined to bring Frodo and Sam to his father, before realizing the peril of the ring. Little is changed ultimately, but the film is enriched by a little more drama than otherwise existed, and a little bit was saved for what might have otherwise been a boring third film. 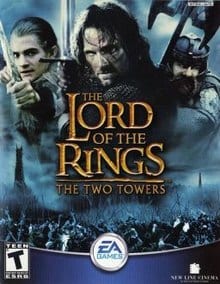 It took a similarly long time before The Two Towers also made its way to video games. Efforts had been intended over the years to bring all of Middle-Earth to the living room, but no plan panned out. In 1994, J.R.R. Tolkien's The Lord of The Rings, Vol. 1 released on Super Nintendo; the game was critically lambasted and a sequel failed to follow. Years later, during filming of the live-action movies, the rights to Lord of the Rings video games became very complicated; adaptations of the books rested with Vivendi Games, while adaptations of the movies was given over to Electronic Arts. The two companies competed to release a trilogy of games around the books; Vivendi rushed The Fellowship of the Ring, opens a new window to market and the game suffered similarly in comparison to the earlier Super Nintendo game. Electronic Arts meanwhile pre-emptively cancelled work on a first game and instead threw even more assets into the creation of the second game, the critically acclaimed The Lord of the Rings: The Two Towers.

Originally released on Play Station 2, The Two Towers was arguably the first commercially successful video game for the franchise. Developers invested significant work, and EA had full rights from New Line Cinema and Wingnut Studios to license art, music, and even the actors for the game. In addition to voiceovers from most of the cast, the game also included motion-capture work by Viggo Mortensen, as well as copious amounts of behind-the-scenes footage and trivia, much of which was unavailable to fans at the time. The game proved so successful, EA announced a sequel based on Return of the King before the first game even released. 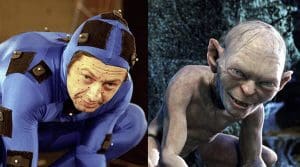 Perhaps the biggest breakout of the 2002 was the career of Andy Serkis and the great leap forward taken with motion capture filming. Jackson cast Andy Serkis for the role of Gollum, a creature once of Hobbit-kind, tortured and misshapen over the years by prolonged ownership of the ring and centuries in isolation. Serkis wore specially designed motion capture suits, with which the cameras recorded his every moment, and even his face. Production filmed scenes involving Gollum twice; once without Serkis and again with him in suit, digitally replacing him with the finished model of the character. Similar filming methods had also been used previously with the Hobbits and their larger friends, including a scene in Bag End between Bilbo Baggins and Gandalf.

Serkis' work on Gollum proved so revolutionary and impressive, it launched a career of similar motion-capture roles for the talented actor, and earned him copious accolades, among the many, many accolades the film would earn, including Academy Awards for Best Sound Editing and Best Visual Effects. Against a $94 million budget, The Two Towers grossed over $940 million.

Stay tuned next year, when we cover The Return of the King.

Looking for something else? As always, the St. Tammany Parish Library is happy to offer usage of our online catalog, opens a new window for more information on this and other topics you may be interested in.

Also be sure to visit the rest of the STPL Bloggers, opens a new window. We are always publishing articles on all manner of topics you may find interesting. Feel free to check us out periodically for new blogs!