YA Spotlight: The Fork, The Witch, and the Worm 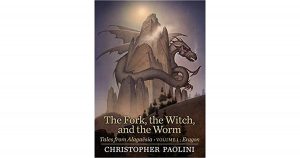 Earlier this year, I blogged about Christopher Paolini's first book, Eragon, opens a new window in which I alluded to the other books Paolini has published since his first novel. As it happens, his latest came out on New Years Eve last year, so let us tackle The Fork, The Witch, and The Worm.

The Fork, The Witch, and The Worm takes place a year after the end of Eragon's adventures in the first four books. Eragon has settled in the far east, many leagues beyond his home, where he is trying to raise dragons who remain perilously close to extinction. Wrought by confusion and anxiety, the dragon rider seeks solace in his companions trying to find peace-of-mind. The elder dragon Umaroth helps to show visions of Eragon's friends and a life lesson that may prove valuable.

The Fork, The Witch, and the Worm is an anthology, containing short stories relevant to Paolini's series. The title of the book also serves as the titles for the three stories within, each one a separate and distinct episode.

Paolini wrote the first and last of the stories. His sister Angela Paolini wrote The Witch. Consequently, The Witch differs in both content and style. Some readers may find the change jarring while others may find it a breath of fresh air. The Fork is perhaps the most relevant of the three stories, showing present-day events in a far-flung village and hinting at future plot lines that Paolini could develop in a true sequel. The Worm focuses on an old Urgal fable and feels more like a well-told oral legend than a modern adventure, while expanding significantly on the lore of the Urgals. Of the three, I personally prefer The Worm, but all are worth reading.

In the end, there is not a lot to The Fork, the Witch and The Worm. At 288 pages, the book is fairly small. Were it as tall as the other books, this would be an even thinner book, perhaps only 200 pages or less. The subtitle notes that this is only Volume One, implying that a sequel to the anthology is due to be published in the future. I'm sure there will eventually be a repackaging of both volumes as a set.

In spite of this, the book is absolutely worth reading if you are a fan of the series and newcomers should not be discouraged at all by either the size or length of the book. Enjoy this appetizer while we all anxiously await Eragon's next adventure.

May the stars watch over you!